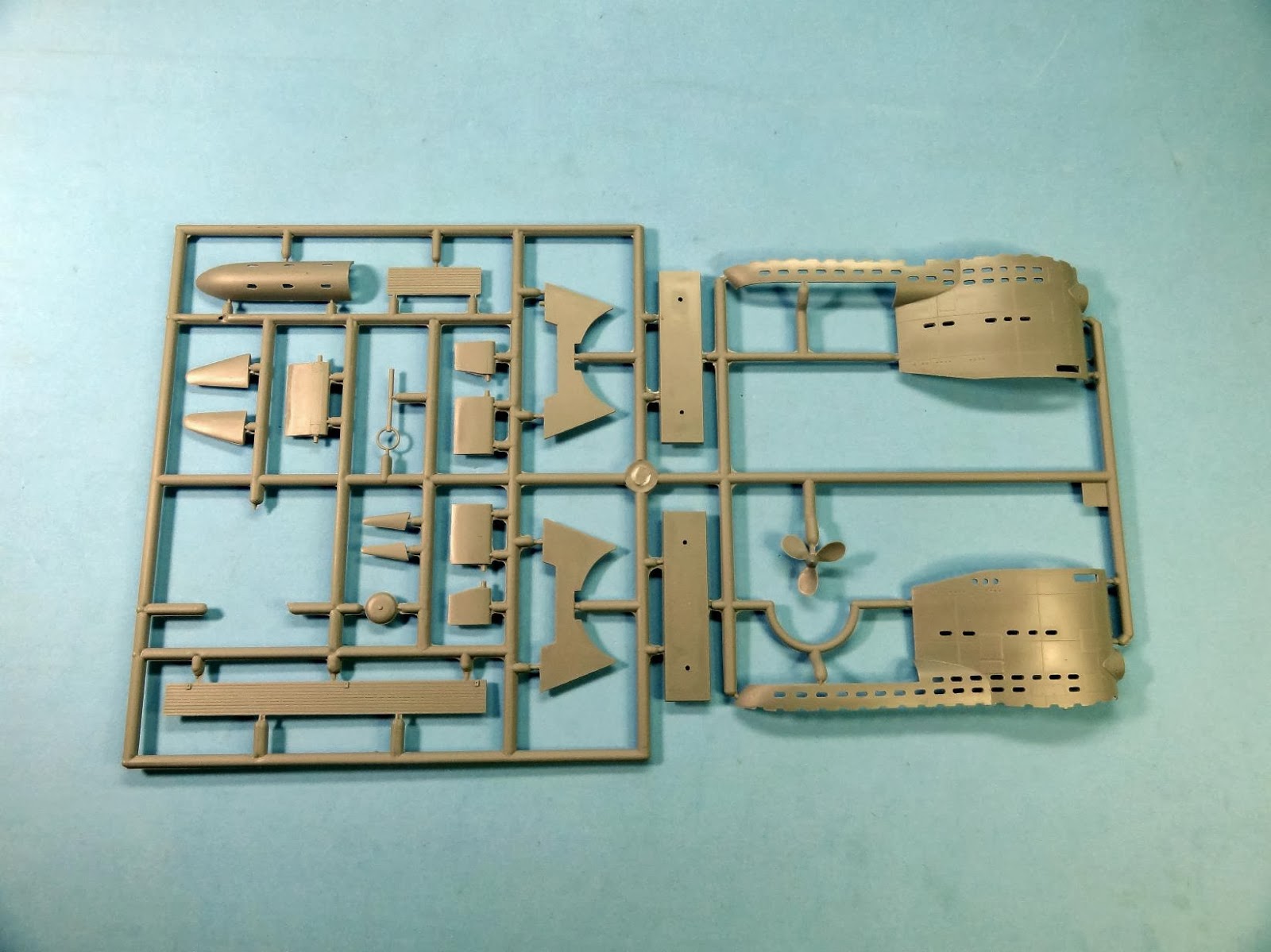 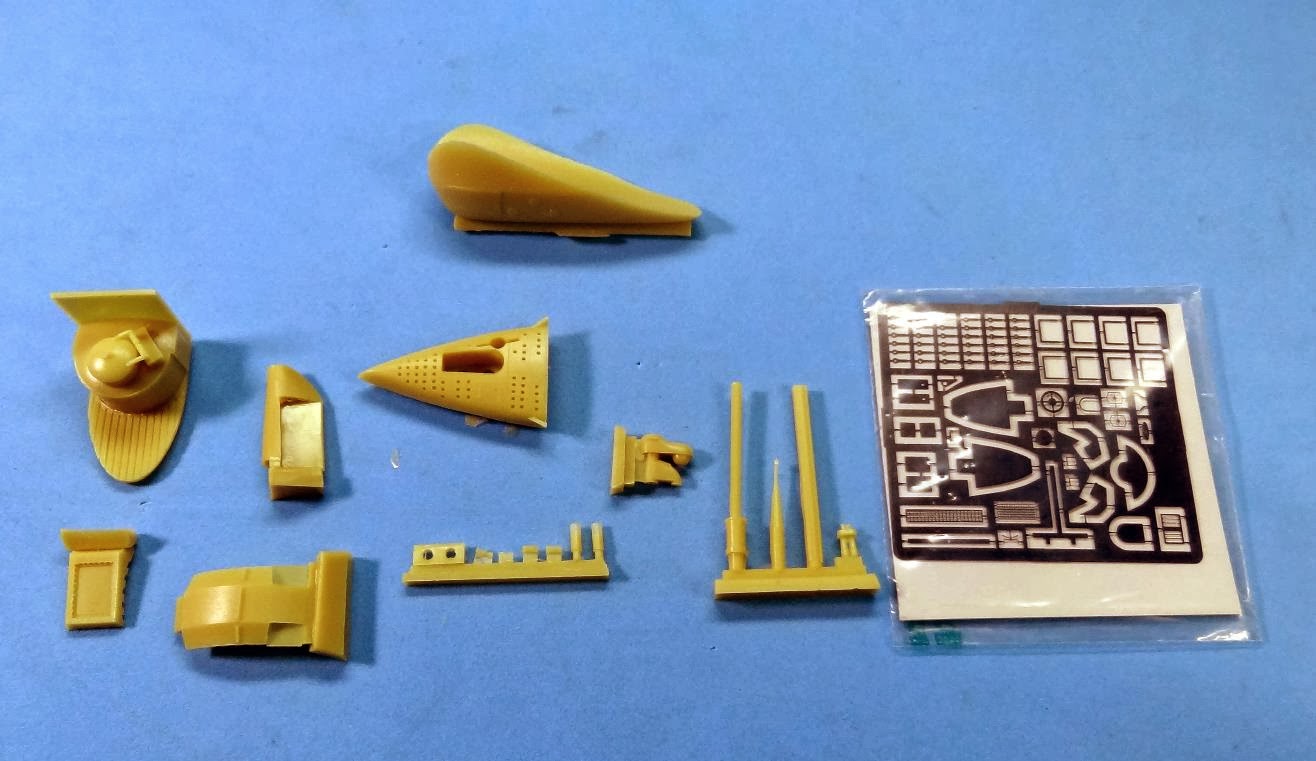 Comments: This is not a submarine kit like Revell`s type VIIC in 1/72 scale. Special Navy´s kit is a short run model of an interesting subject, but with all the problems of a limited production kit.
First the two main hull parts were warped in a way that gluing them together took me a few days. 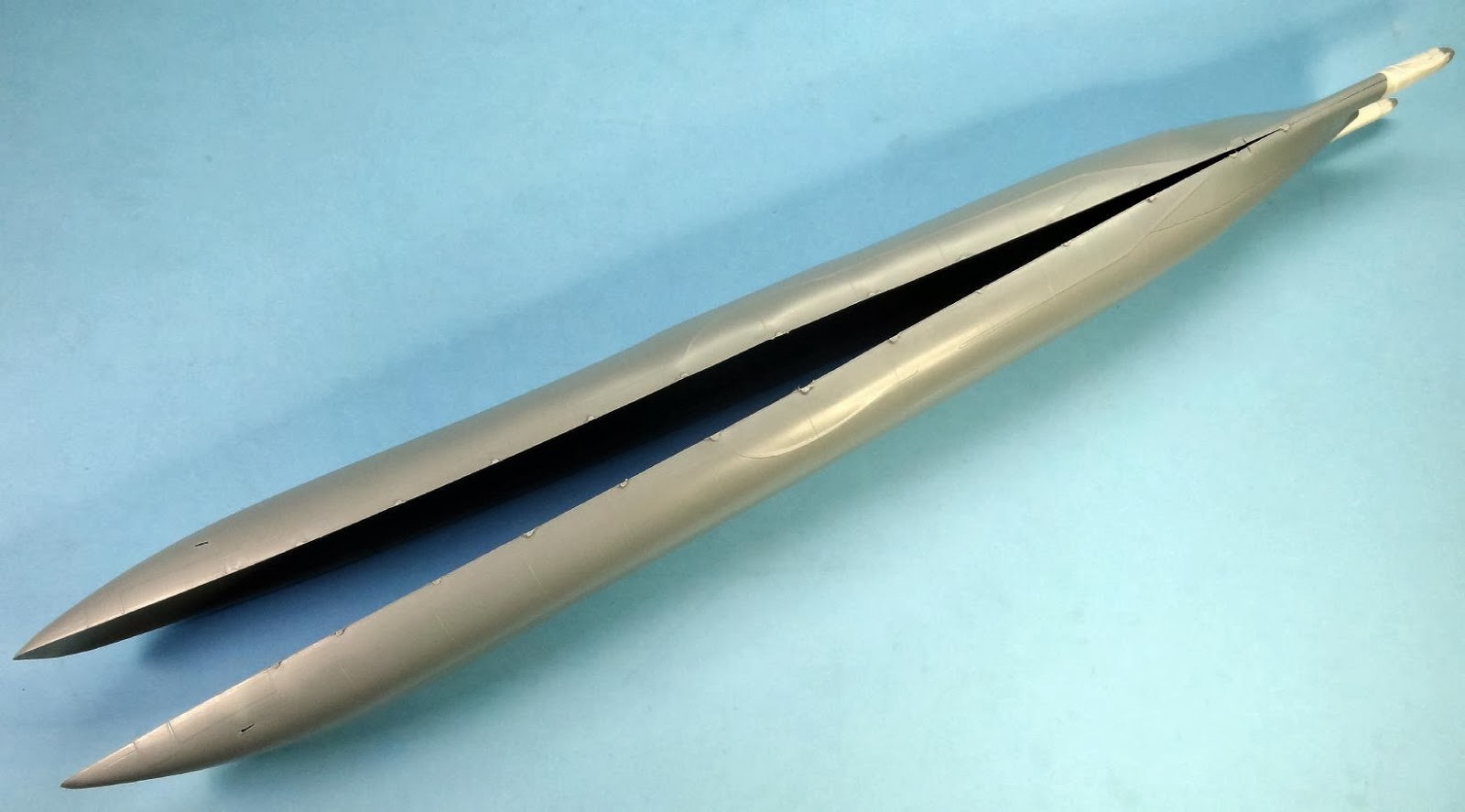 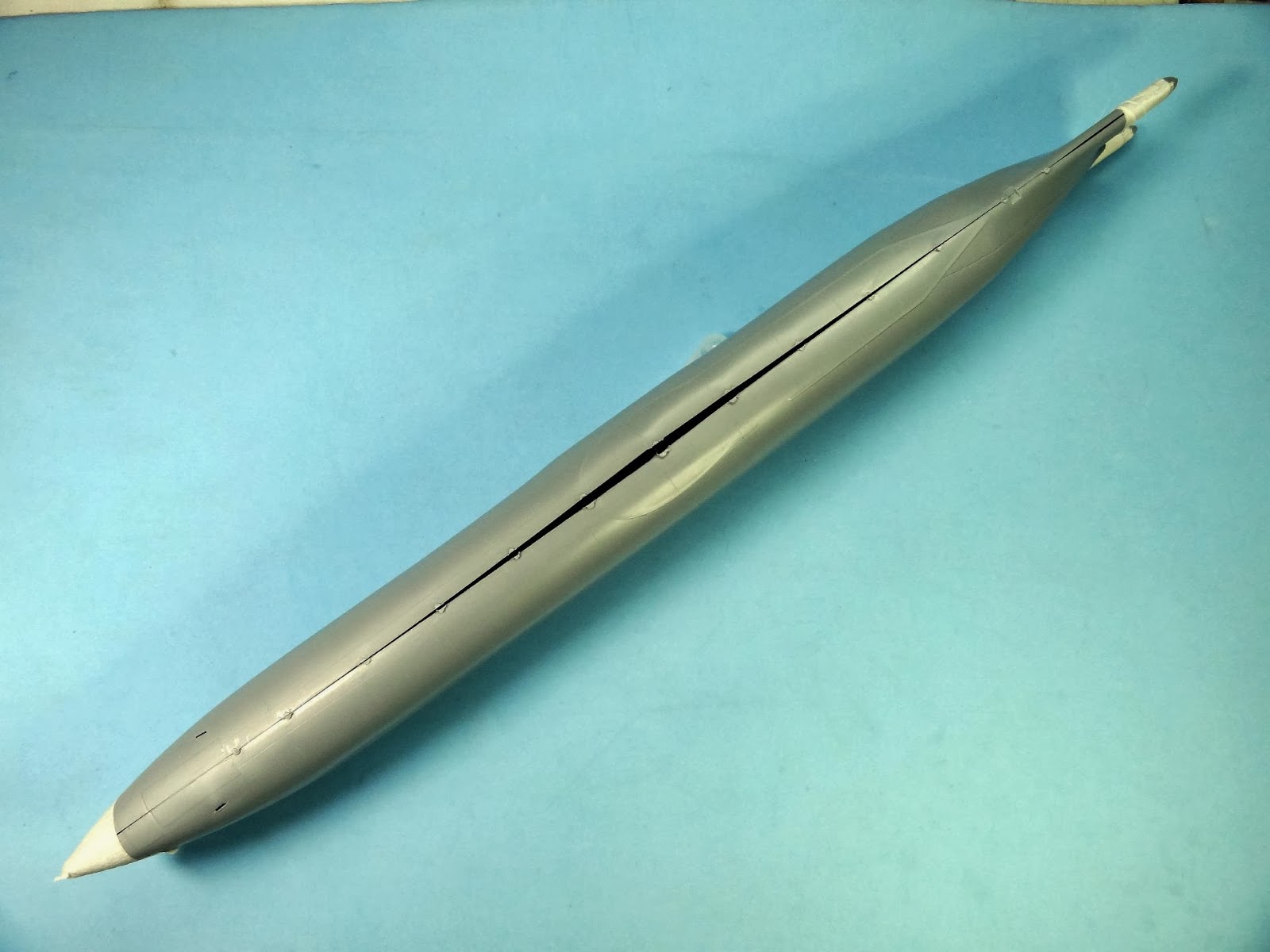 There was also lots of flash to work with: 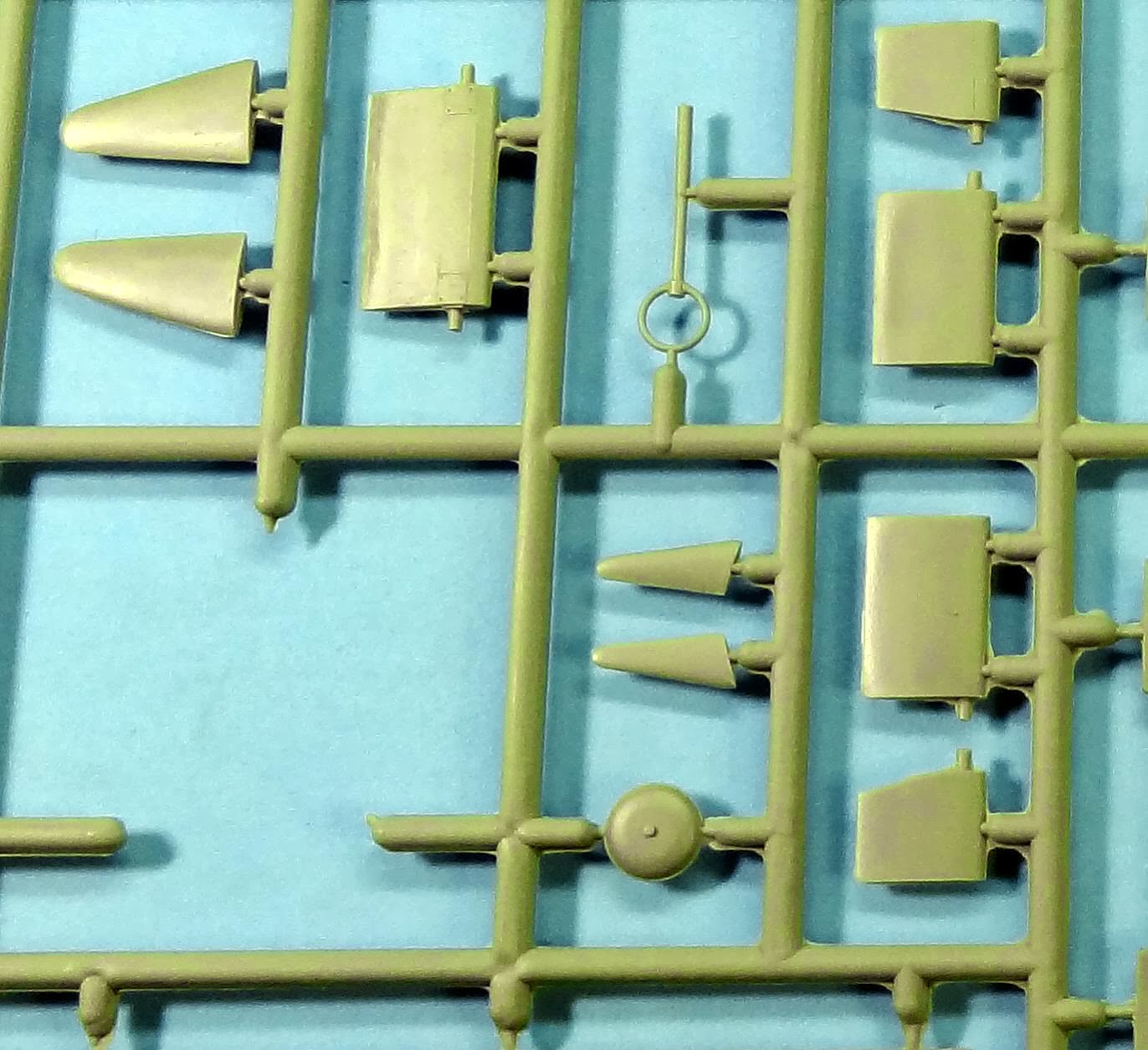 Besides that, you will have to work with a multi-media kit, with injection parts and resin, photo-etched and some scratchbuilding details.

1) Construction: to get the hull aligned, i glued in parts and added some reinforcement sprues inside to get a solid main assembling part to work with.

Some other small components were built as the hull was taking shape: 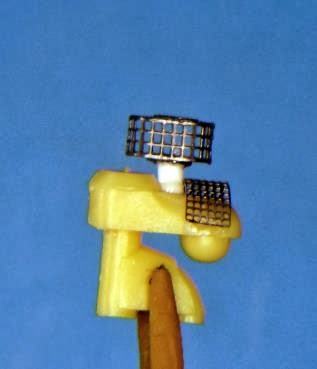 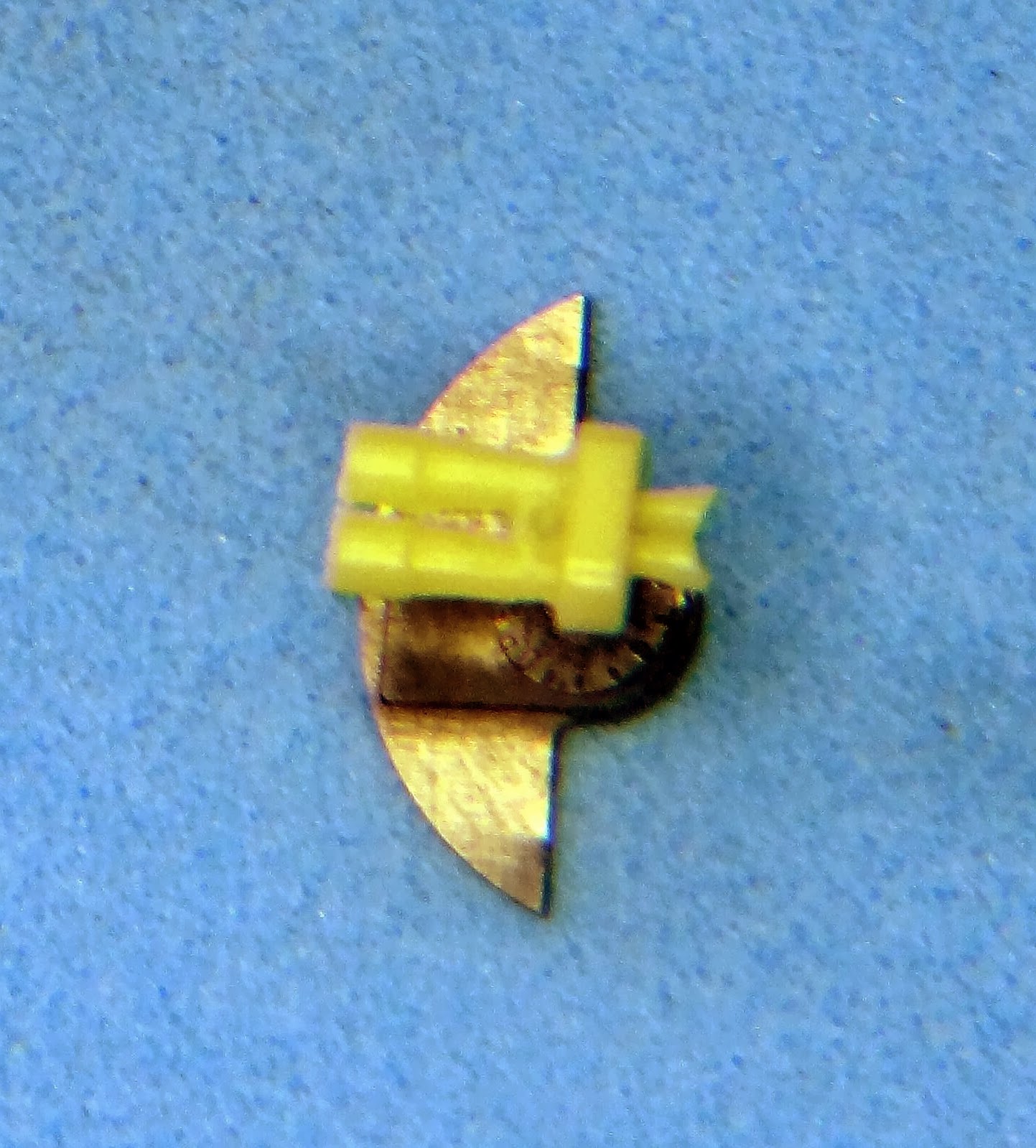 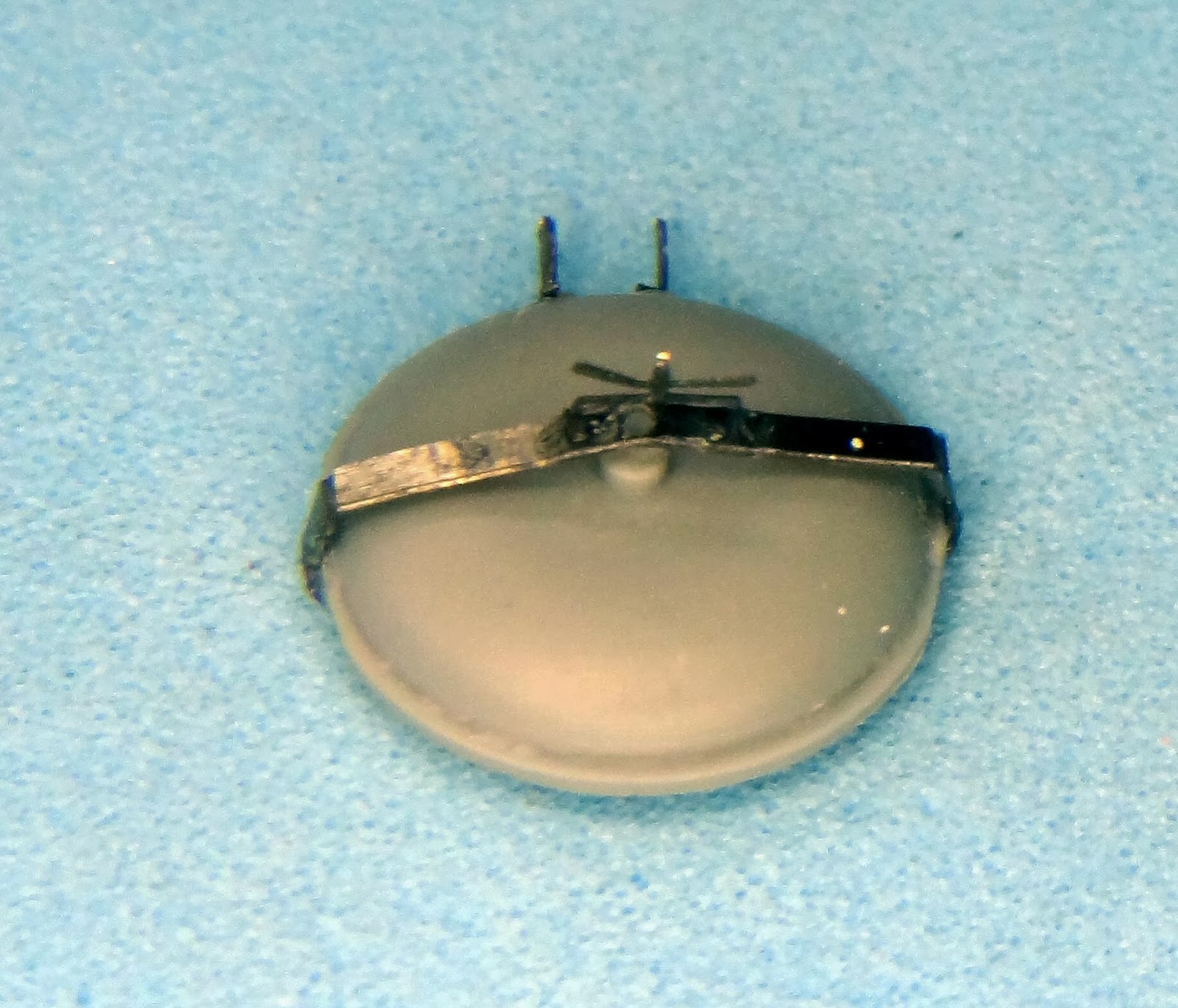 Work also started on the conning tower. Bellow you see the main hatch before and after careful painting and weathering. 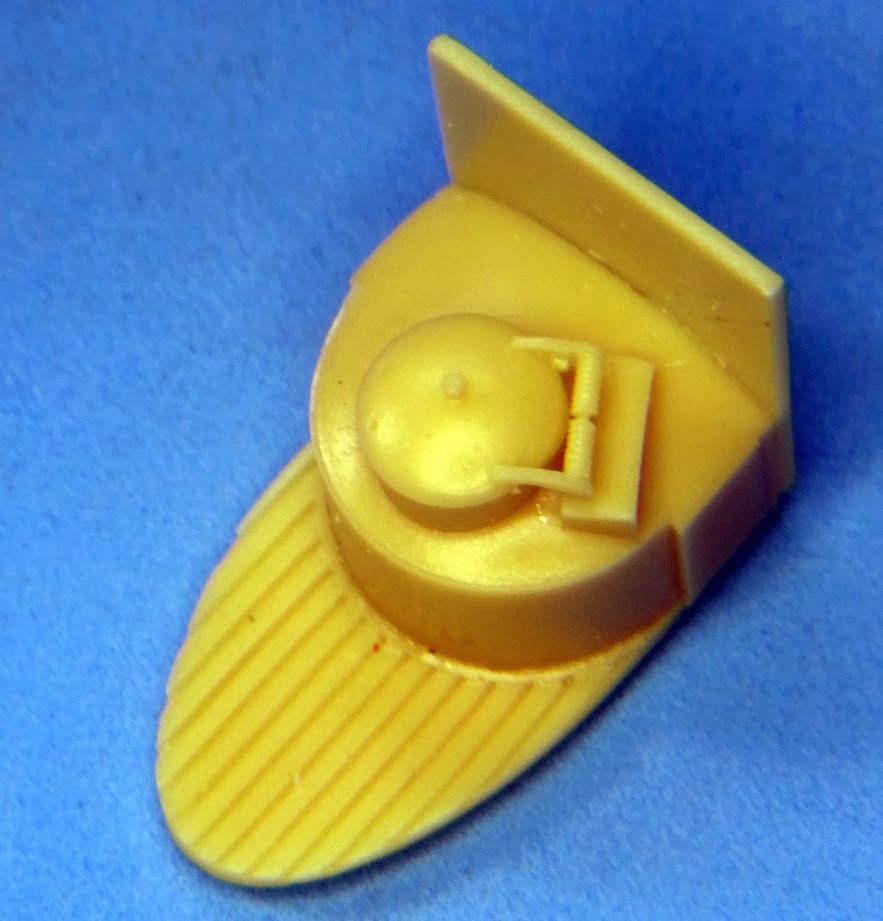 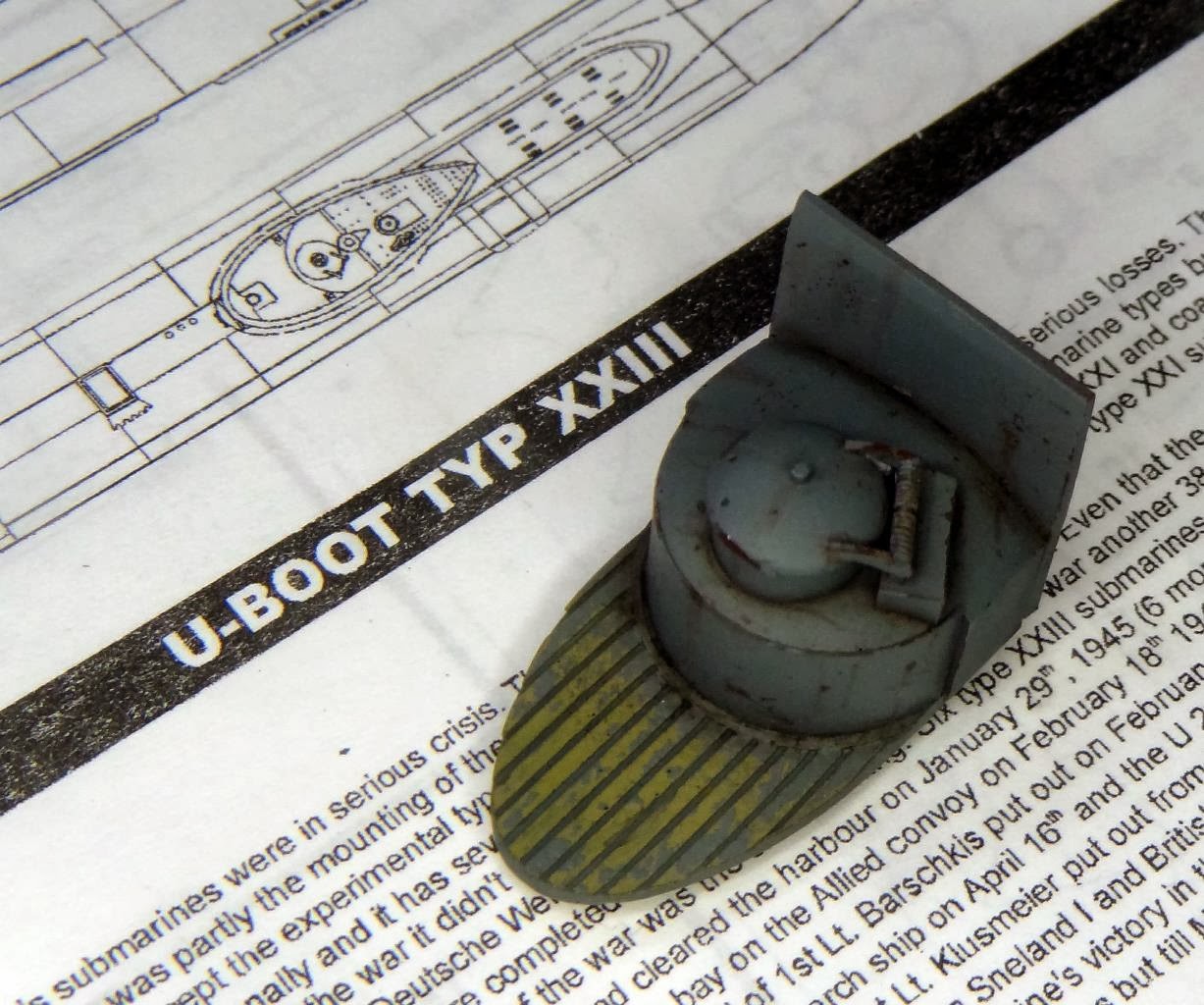 The hull and conning tower during some dry fitting: 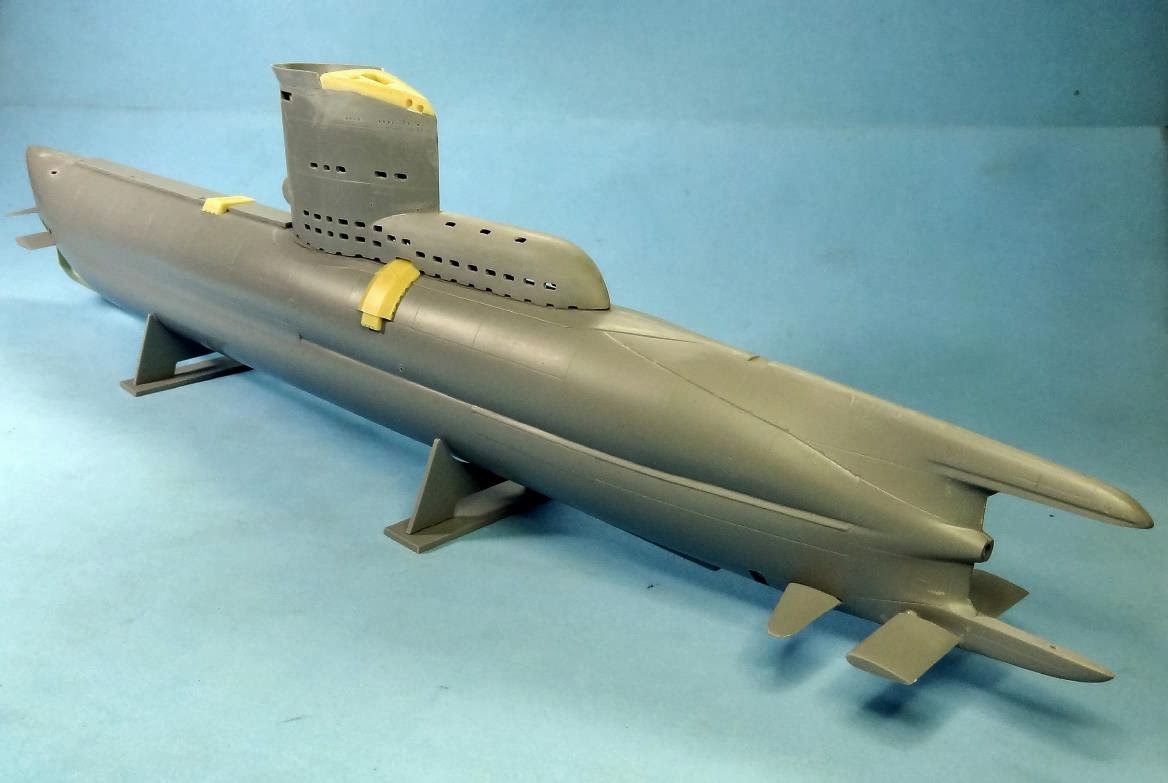 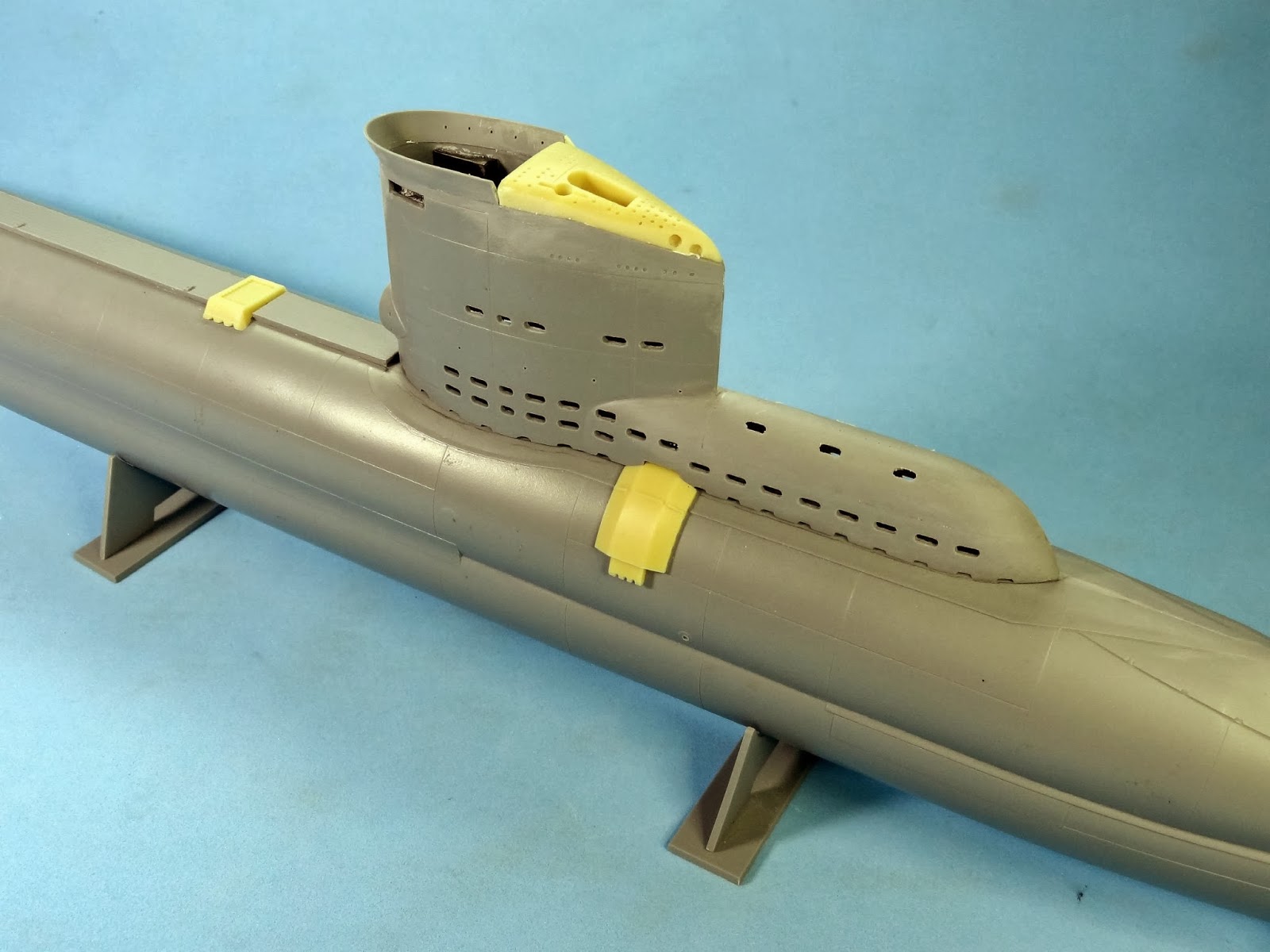 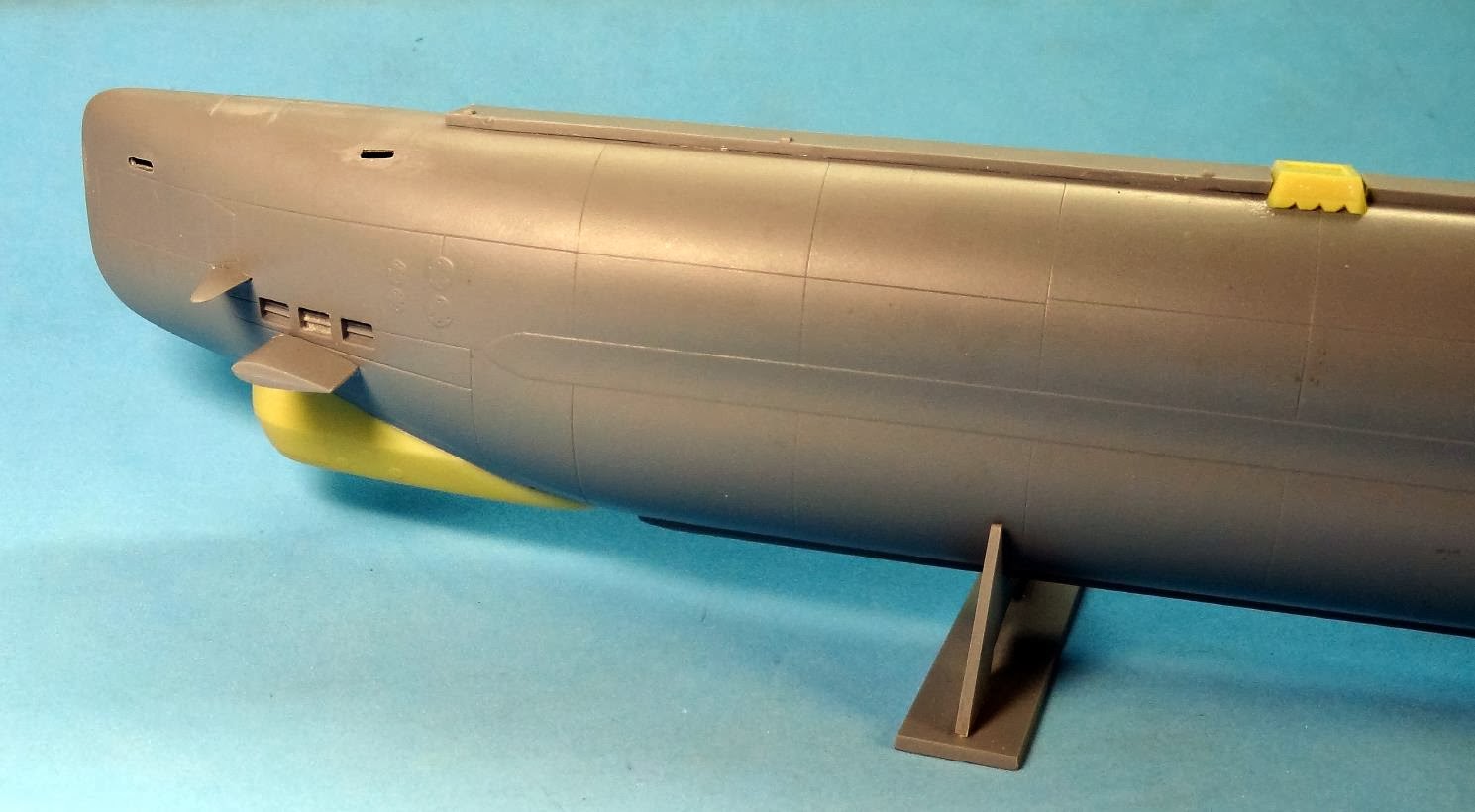 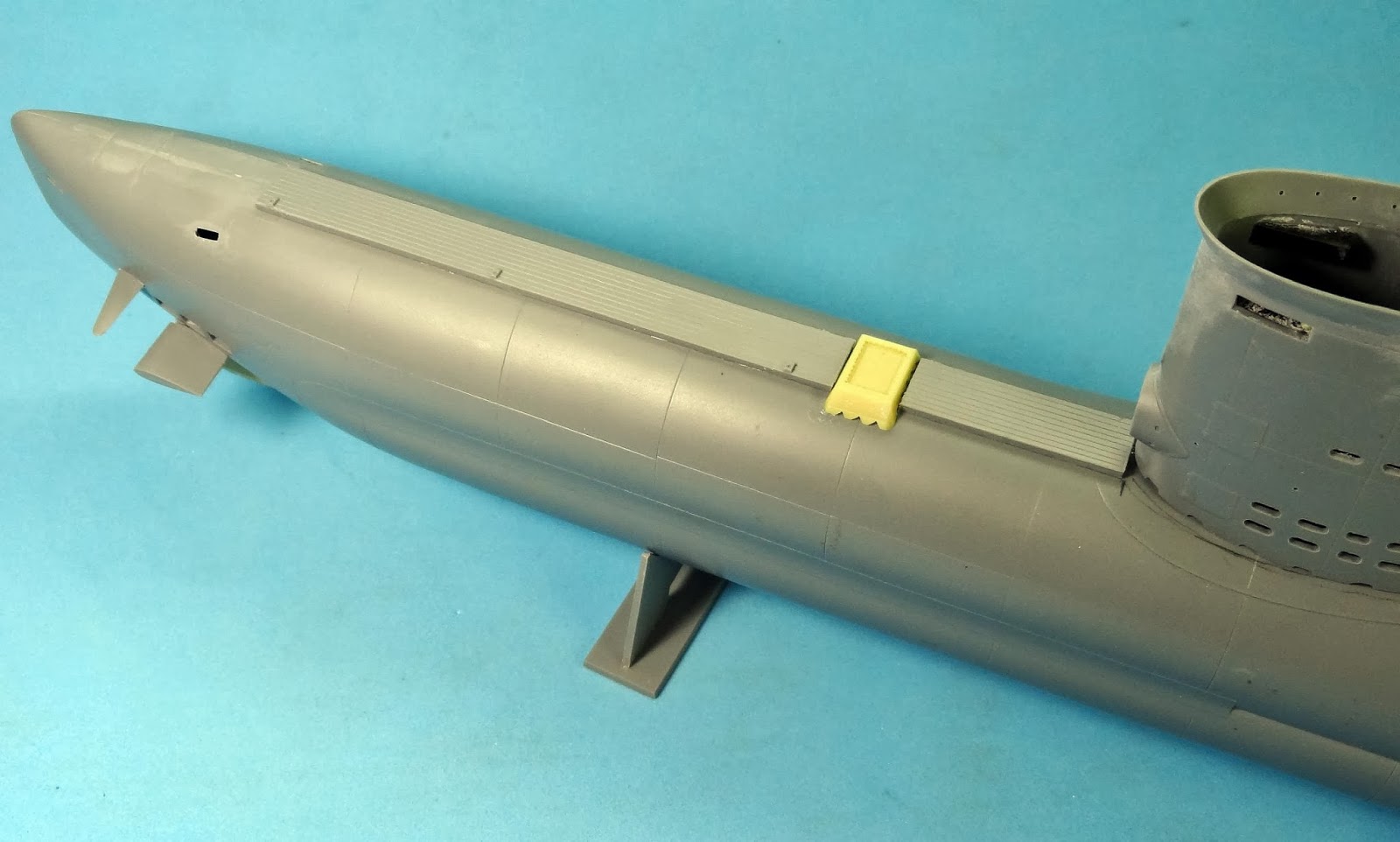 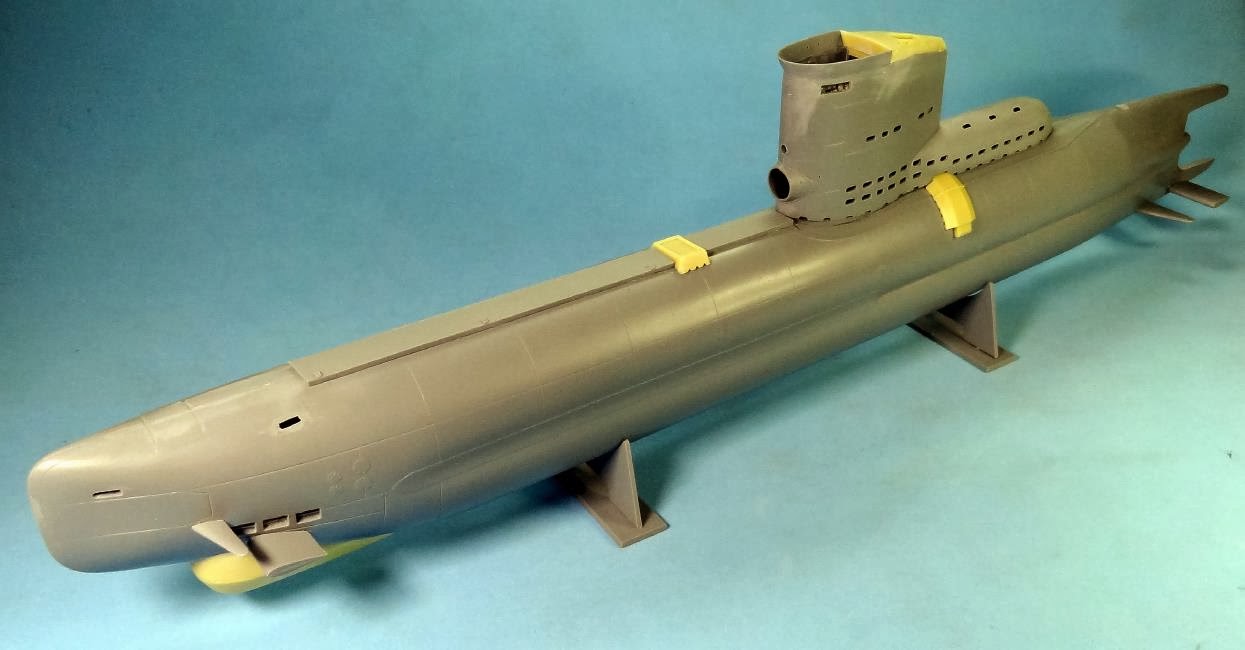 Painting and weathering the boat:
The conning tower: First a basecoat of German grey as primer. A few red brown spots were painted to simulate rust.

The conning tower was then painted with XF19 Sky grey. The center of the panels were highlighted by adding XF2 white to base color. 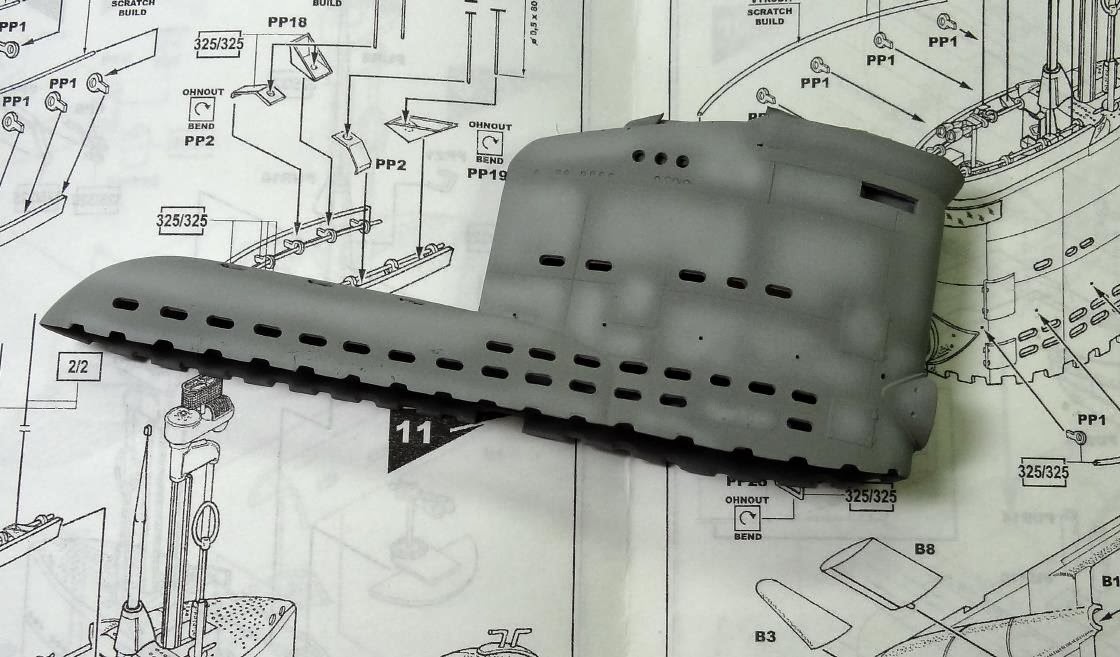 The panel lines were then painted with a sharp 0,3mm pencil. 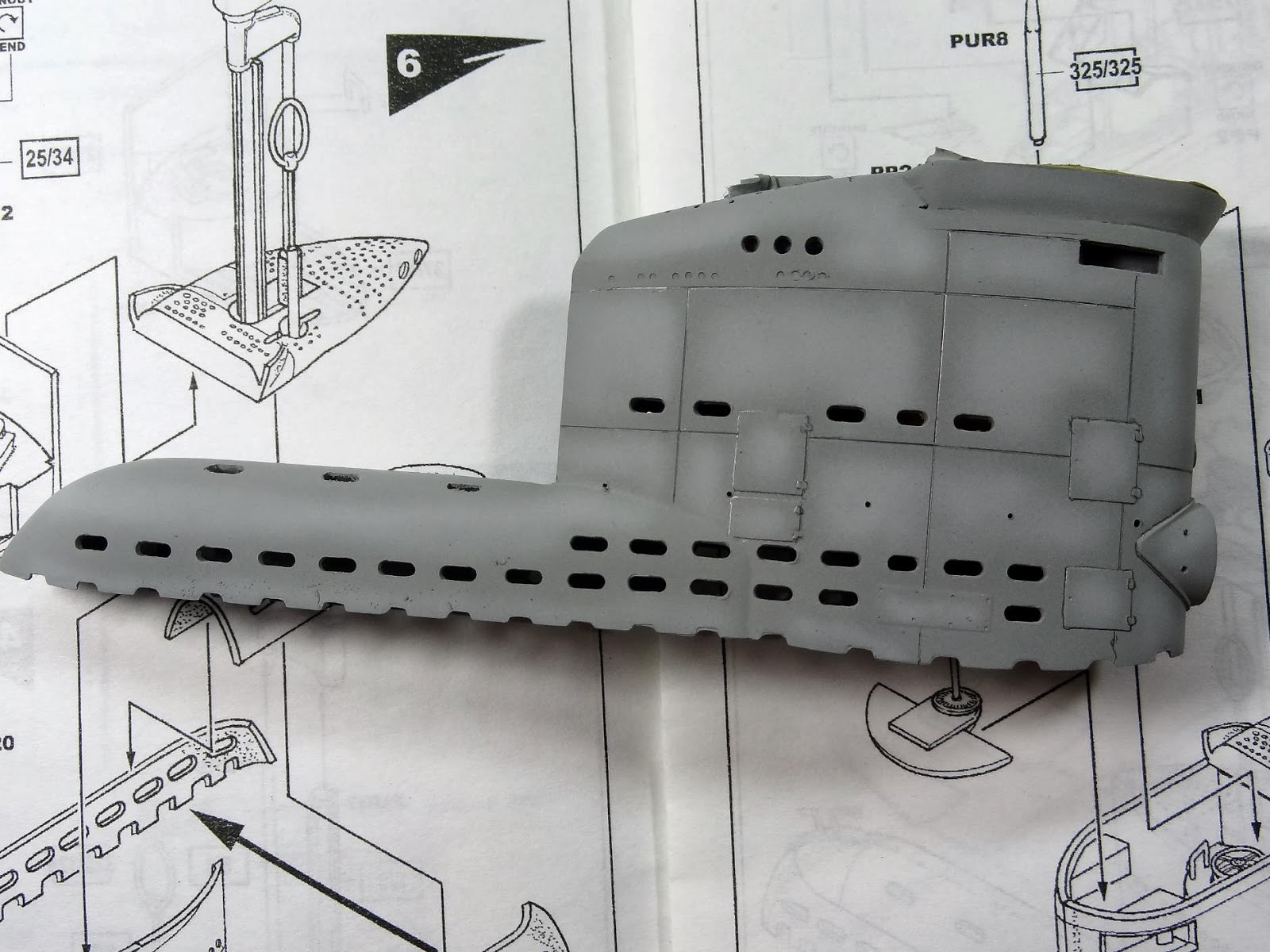 Then a few scratches were made with a modeling knife showing a few spots of the primer color and brown rust. 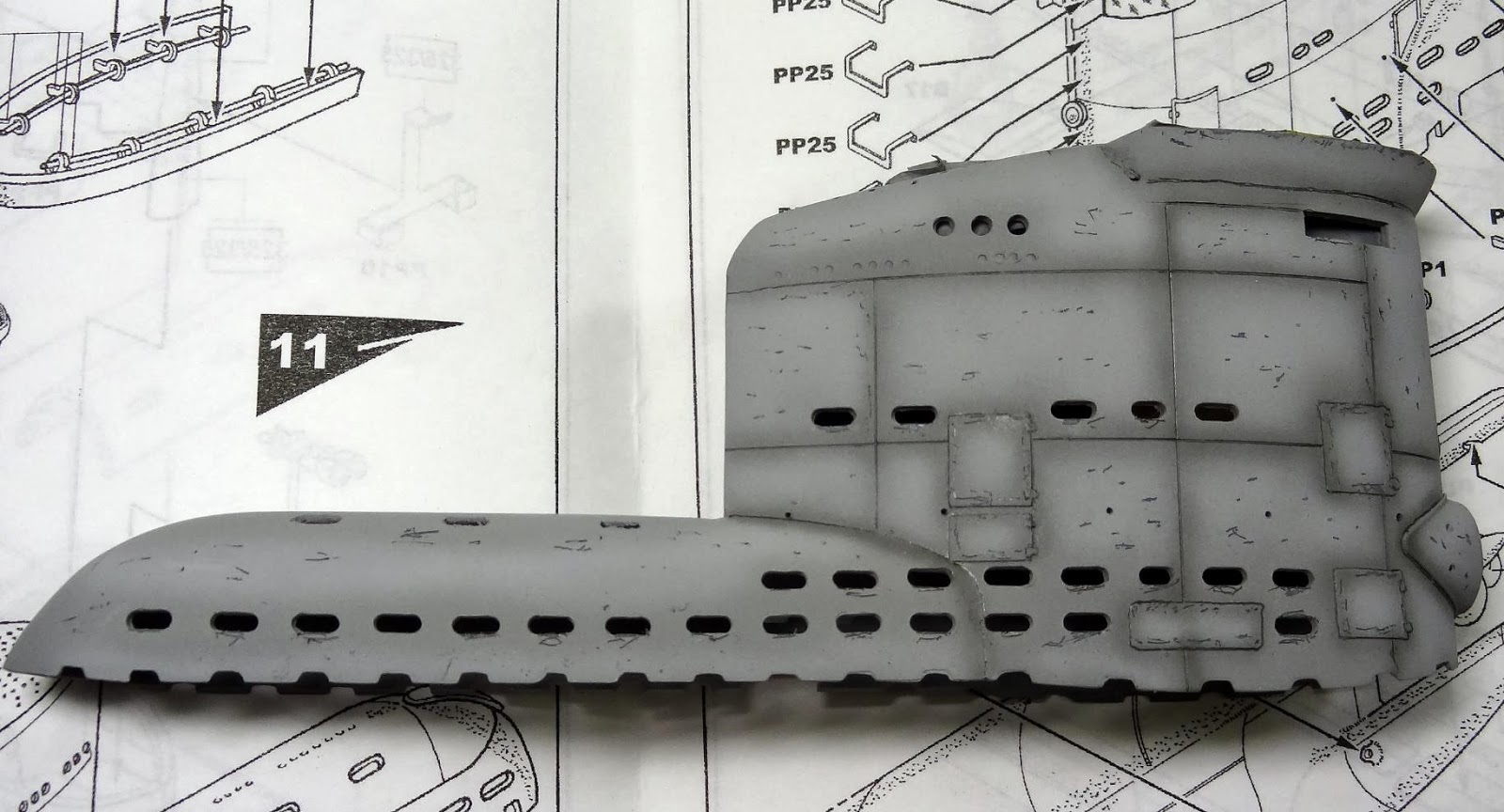 A very diluted solution of red brown was airbrushed to add wear to the base paint. 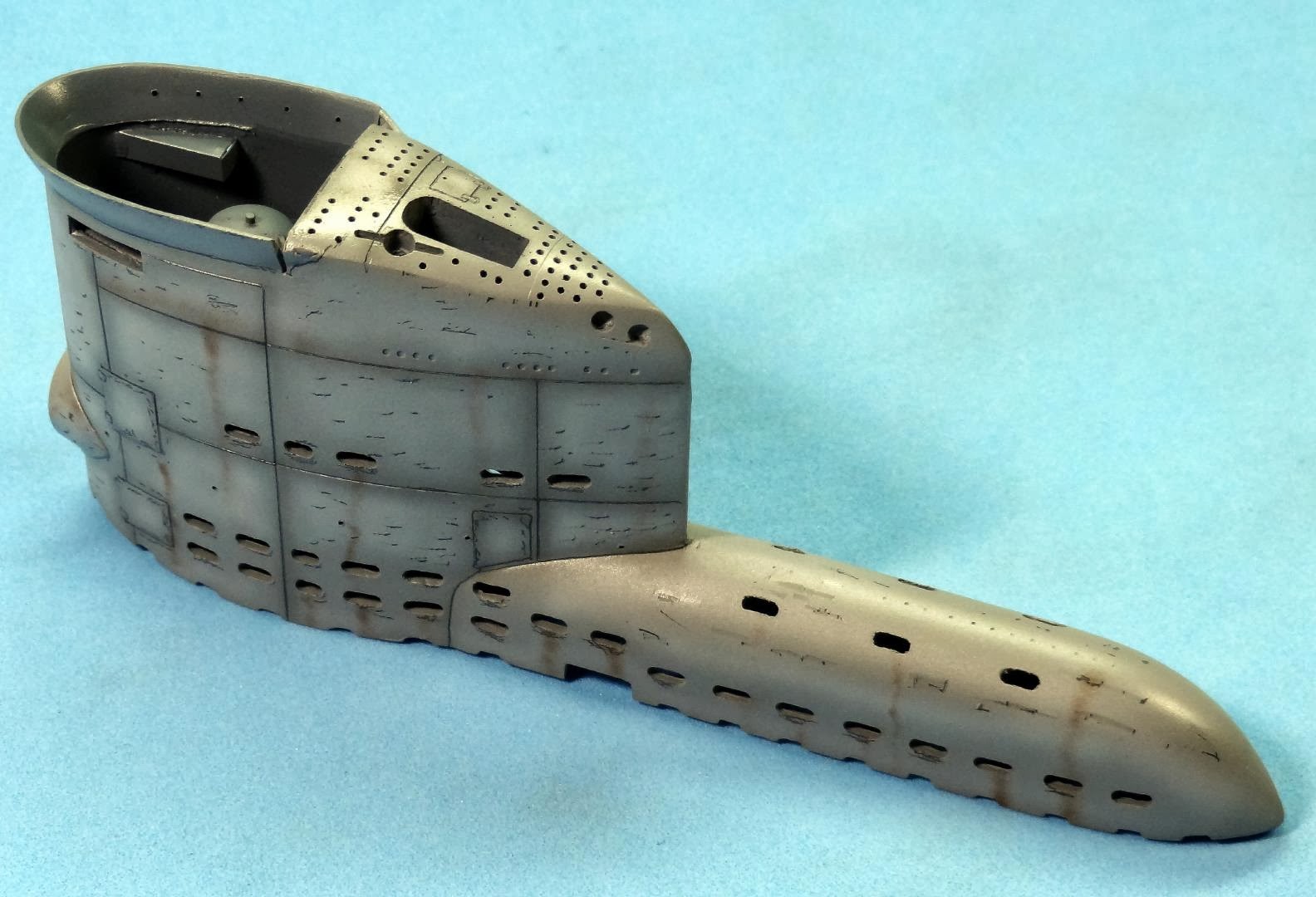 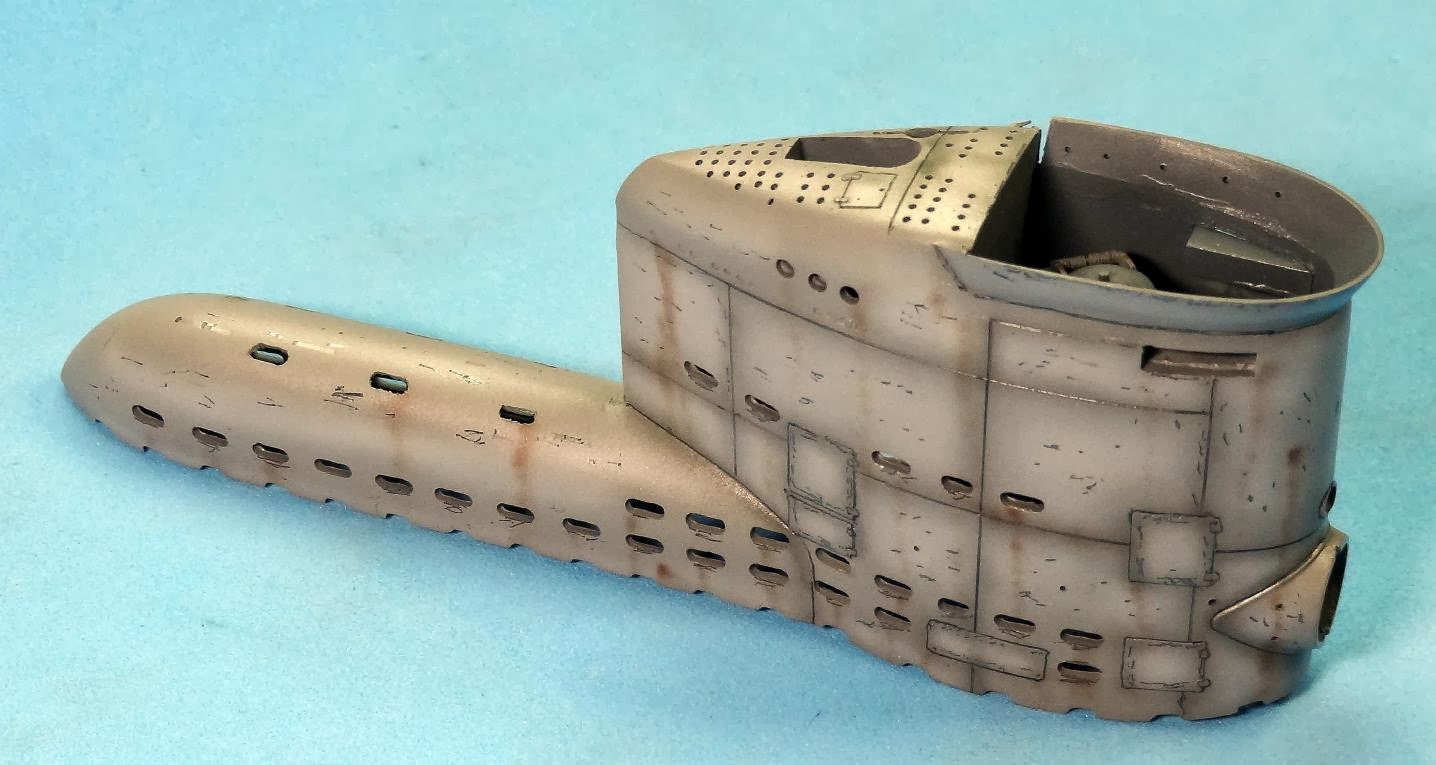 Everything was sealed under a coat of Future.
Other detail were also finished and weathered. 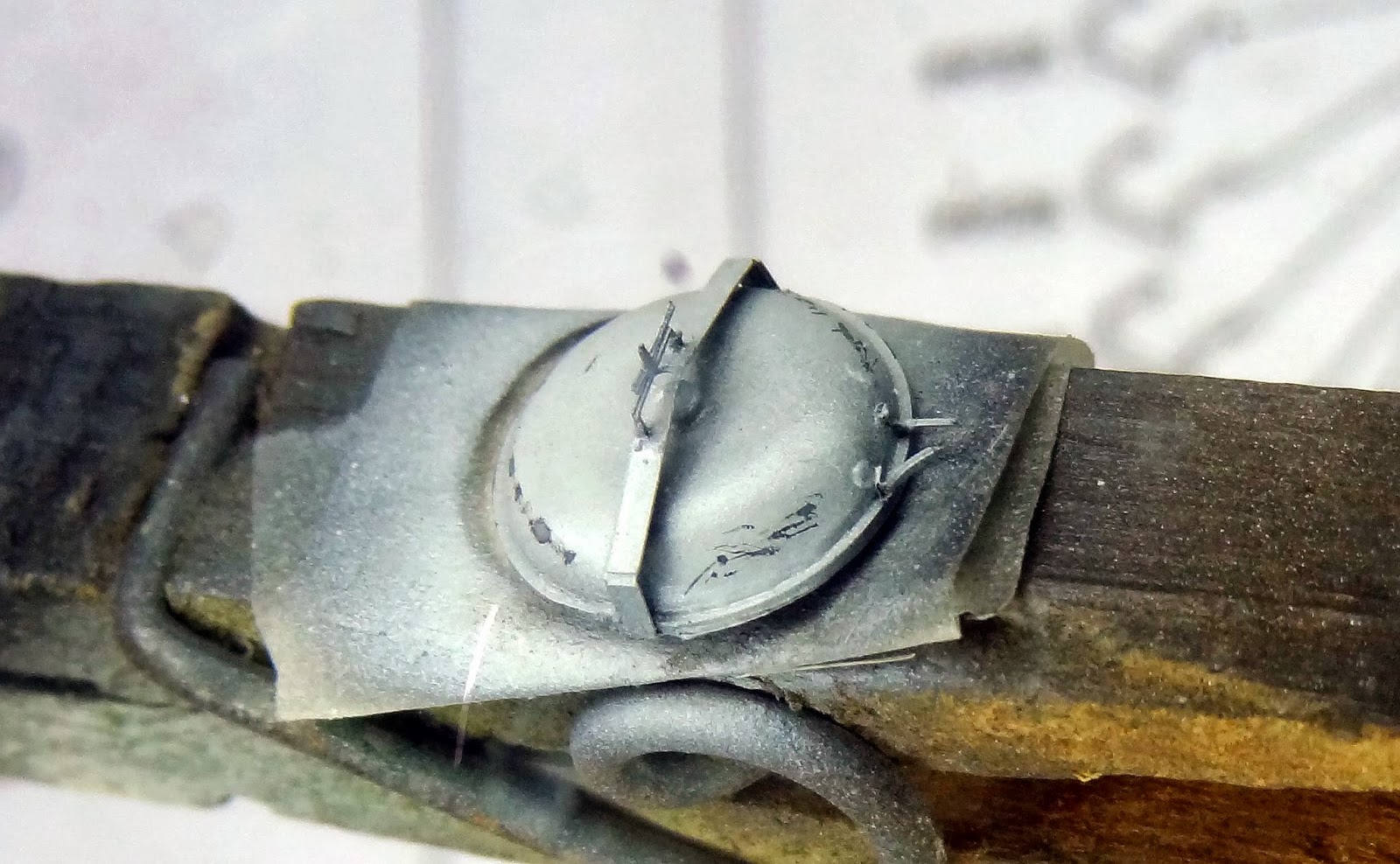 The hull was painted neutral grey and the center of the panels highlighted by adding white to the base color.
The pencil technique was used again for the panel lines. X19 smoke was airbrushed along these panel lines to increase depth. A very diluted solution of red brown and german grey was airbrushed to simulate streaks of rust running down the hull. Again future sealed the paint job. 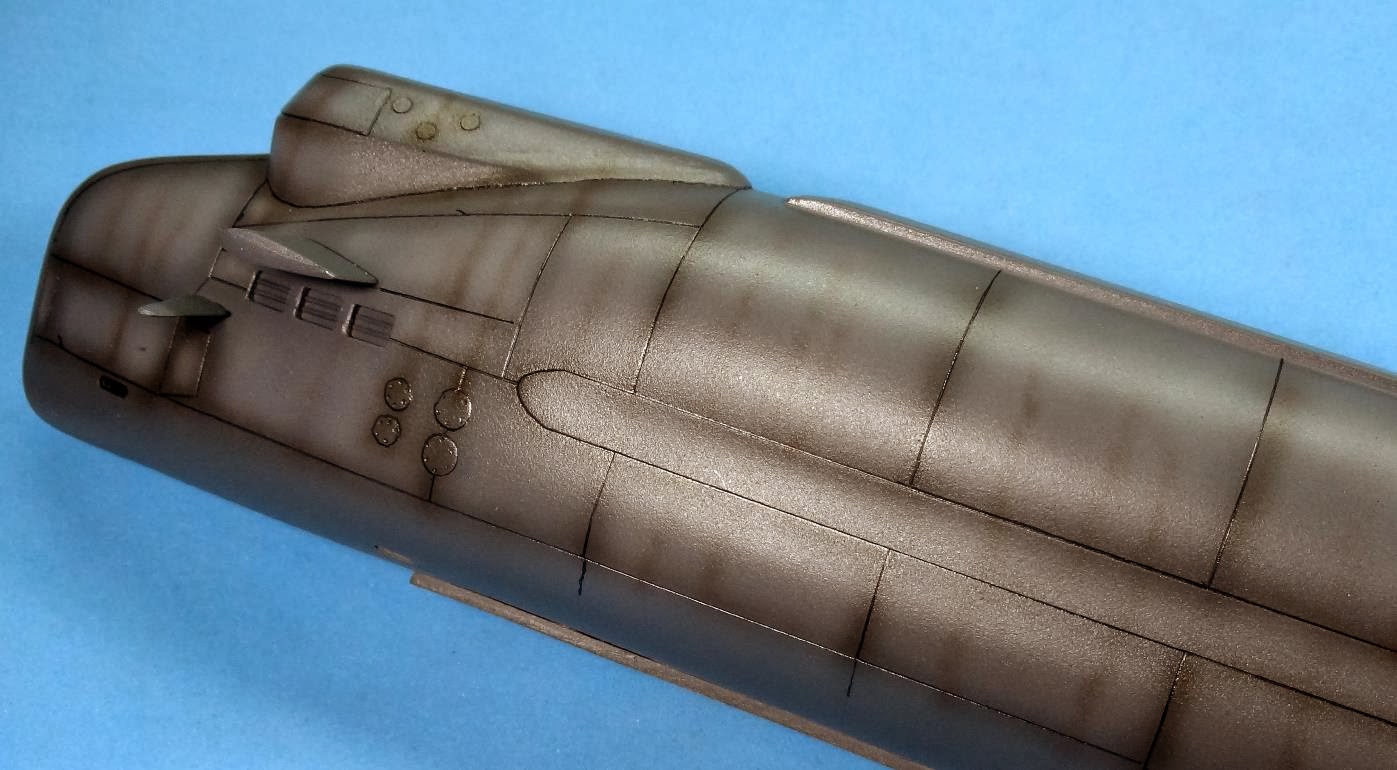 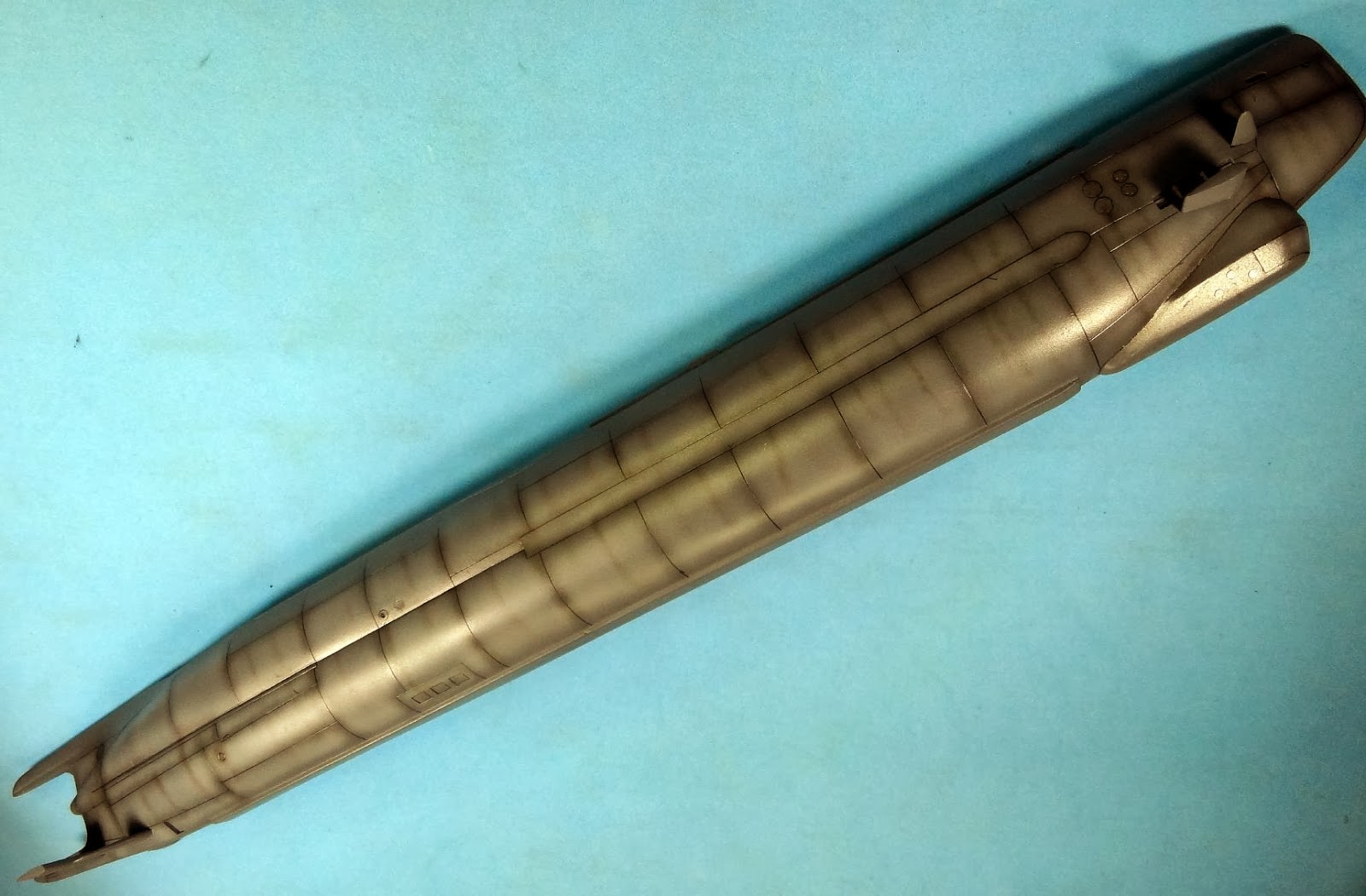 I was not completely satisfied with the weathering result at the conning tower. So, with a fine brush and vallejo acrylics, i painted some more scratches mainly along the panel lines. Rust was simulated using vallejo acrylics diluted with water. I think that the end result improved the weathering effect witch was intense in these boats. 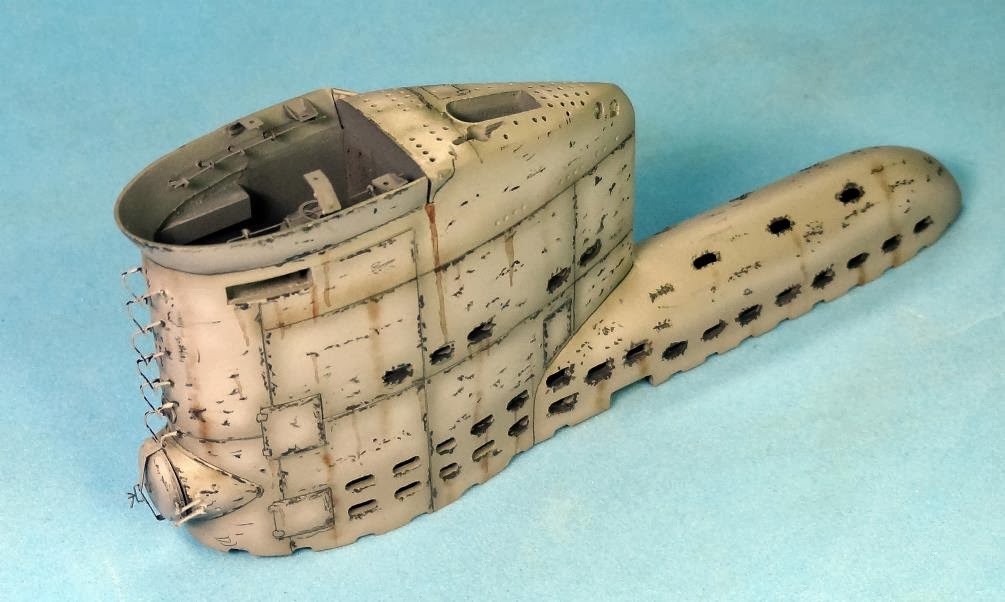 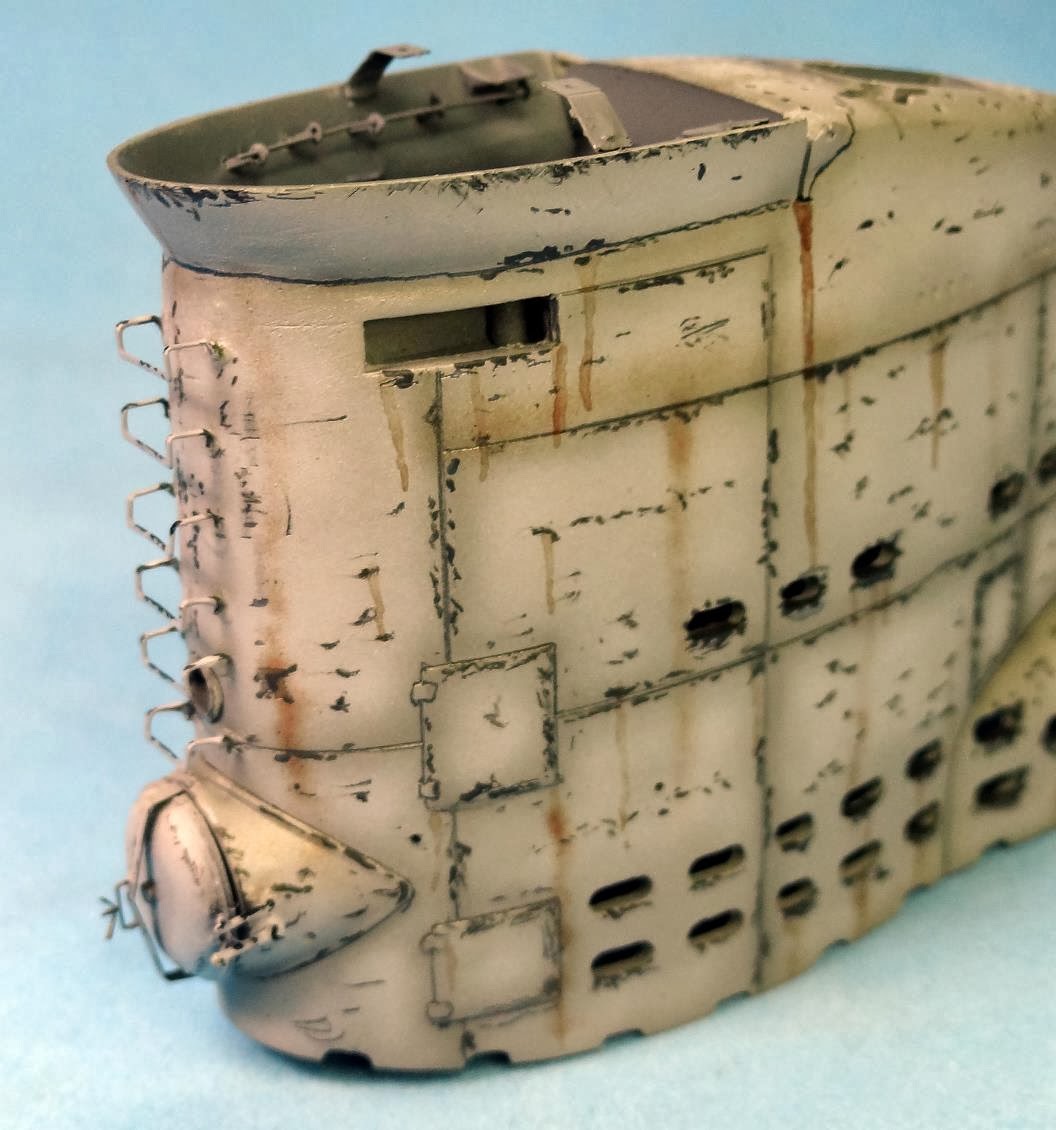 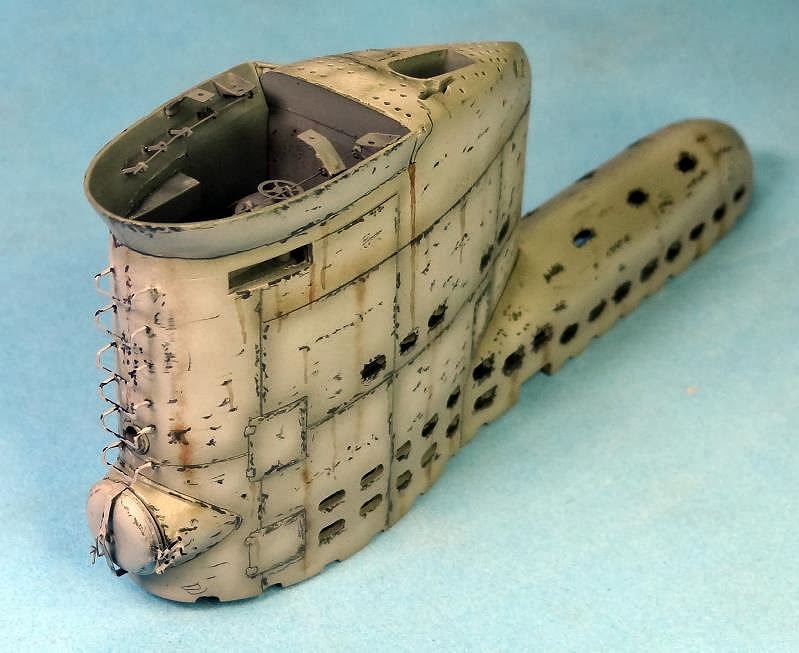 The painting of the hull is advanced now. I placed the coning tower over the hull to star weathering and keep both parts similar. 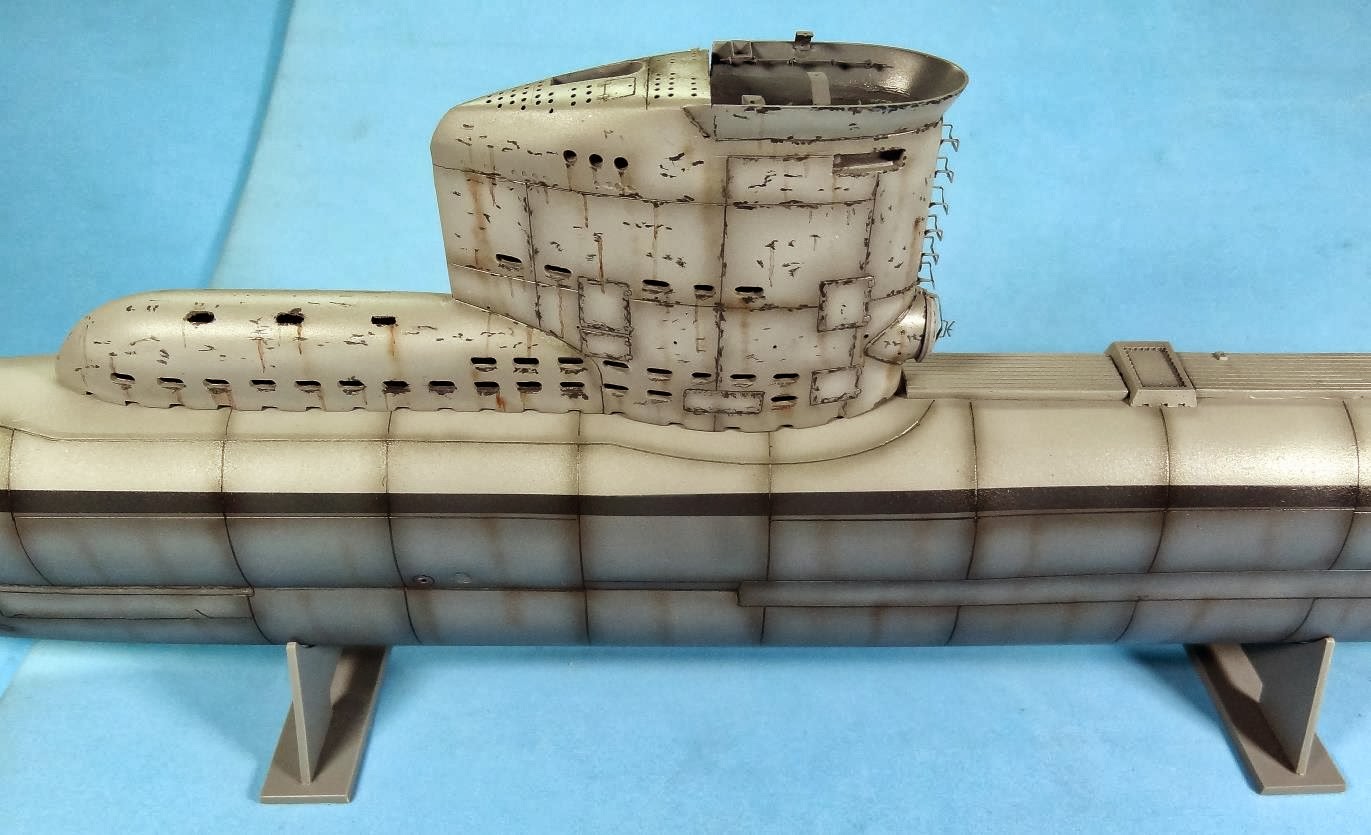 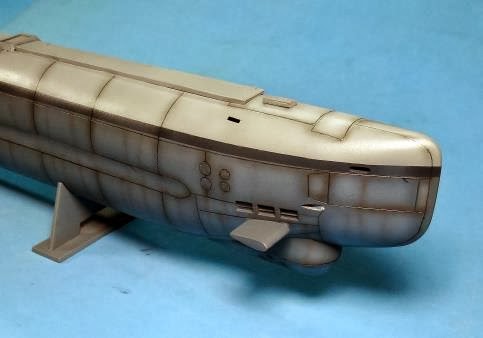 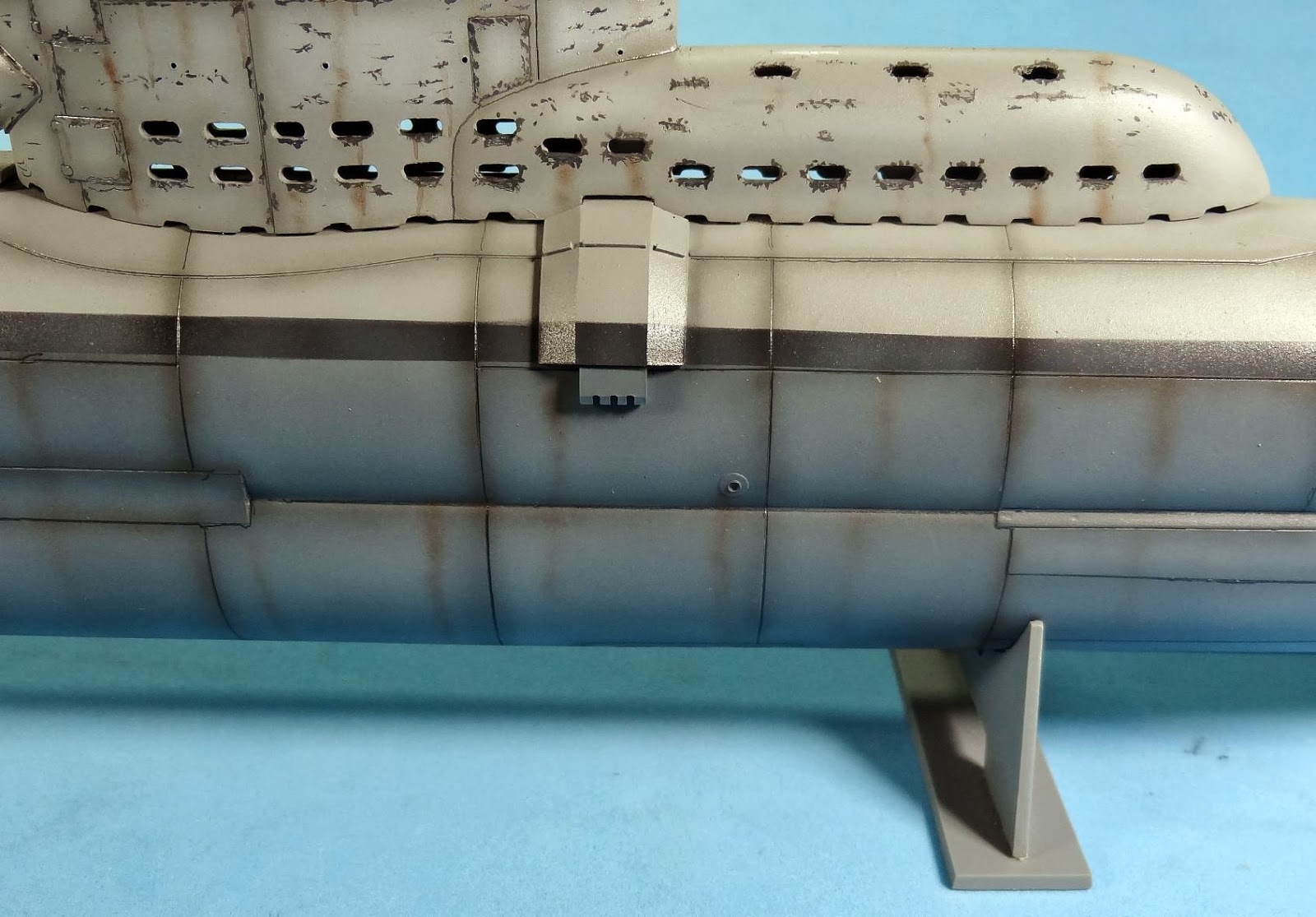 Weathering of the hull started by the wood deck.
First it received a coat of yellow brown color:

It was then sealed with a coat of future:

I used the hair spray technique to show some wear of the wood stained color of the deck. Here you see the matt finish the resulted from the application of the hair spray:

The deck color was then airbrushed:

The grey paint was then washed out with a brush soaked in water:

The panel lines were highlighted with a sharp pencil: 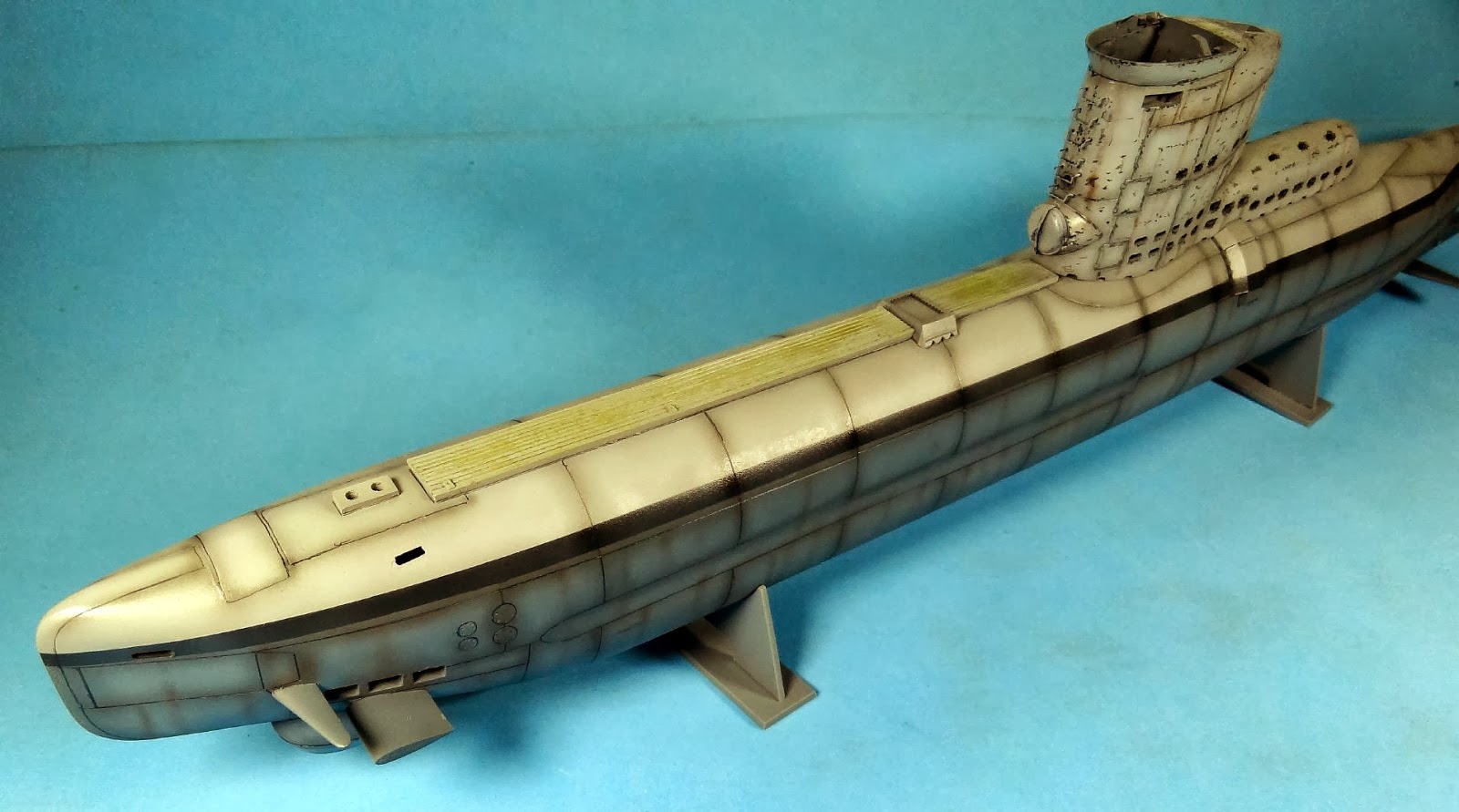 So far, that is what i have done. Now i will start the weathering of the light grey color of the deck. I also will have to fix some broken parts, as the diving planes that were damaged during the masking for painting the kit. Some pictures show how things are going with the construction: