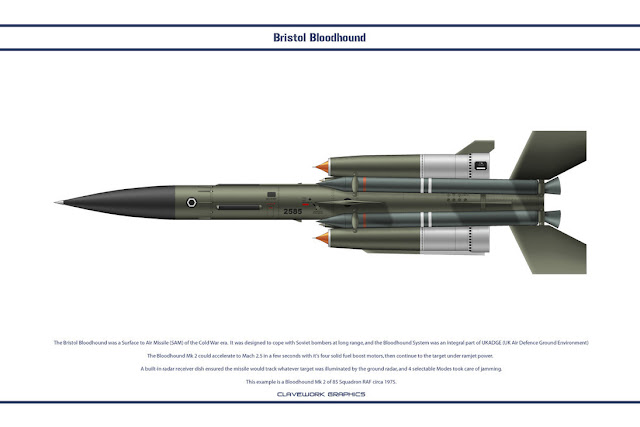 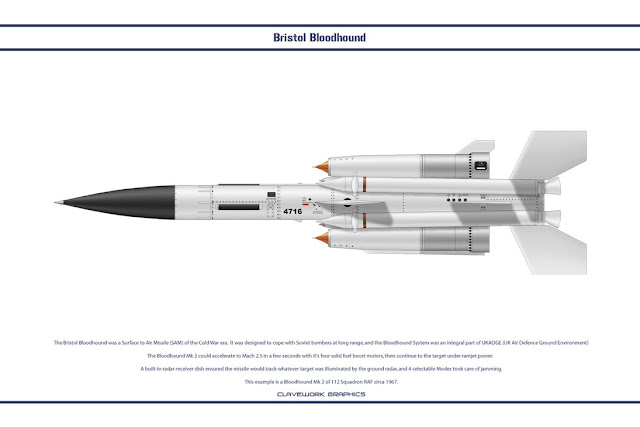 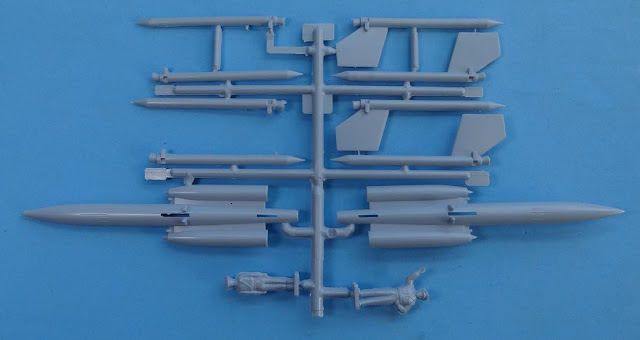 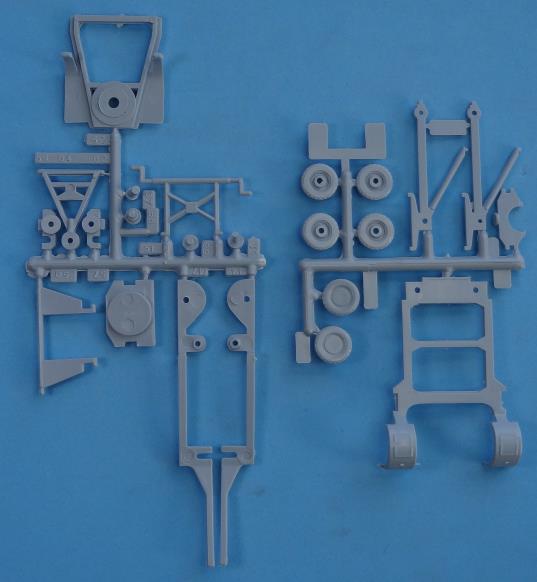 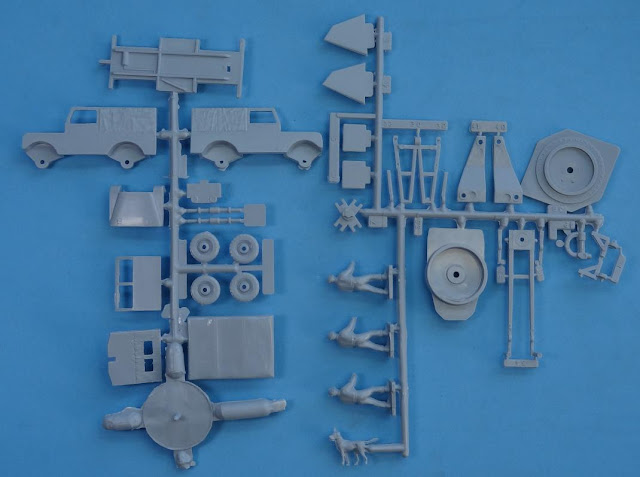 Subject: Bristol Bloodhound Surface-to-air missile.
Location: Royal Air Force Museum, London, United Kingdom, 2013
Comments: The Bristol Bloodhound is a British surface-to-air missile developed during the 1950s as the UK's main air defence weapon, and was in large-scale service with the Royal Air Force (RAF) and the forces of four other countries. The Bloodhound Mk. I entered service in December 1958 and the last Mk. II missile squadron stood down in July 1991, although Swiss examples remained operational until 1999.
The main missile is a long cylinder of magnesium frames and aluminium alloy skin with a prominent ogive nose cone at the front and some boat-tailing at the rear. Small aluminium-covered wooden cropped-delta wings are mounted midpoint, providing pitch and roll control by pivoting in unison or independently with additional steering provided by differential fuel feed to each of the ram jets. Two smaller rectangular fixed surfaces were mounted in-line with the main wings, almost at the rear of the missile.
The boost engines are held together as a single assembly by a metal ring at the rear of the missile. Each motor has a small hook on the ring as well as similar one at the front holding it to the missile body. After firing, when the thrust of the rockets falls below the thrust of the now-lit ramjets, the boosters slide rearward until the front hook disengages from the missile body. The boosters are then free to rotate around their attachment to the metal ring, and are designed to rotate outward, away from the fuselage. In action, they fold open like the petals on a flower, greatly increasing drag and pulling the entire four-booster assembly away from the missile body.
Small inlets on the roots of the stub wings holding the engines allow air into the missile body for two tasks. Two ram air turbines driving turbopumps generate hydraulic power for the wing control system, and a fuel pump that feeds the engines. Smaller inlet tubes provide ram air to pressurize the fuel tanks. Kerosene fuel is held in two large rubber bag tanks in bays either side of the wing bay where the wings are attached. Electrical power was provided by a molten salt battery ignited at launch.
Although in tests the Bloodhound had executed direct hits on target bombers flying at 50,000 ft, Mark II production models had proximity fuzed warheads designed to fire a hoop of metal rods and so destroy attacking aircraft without needing this degree of accuracy. 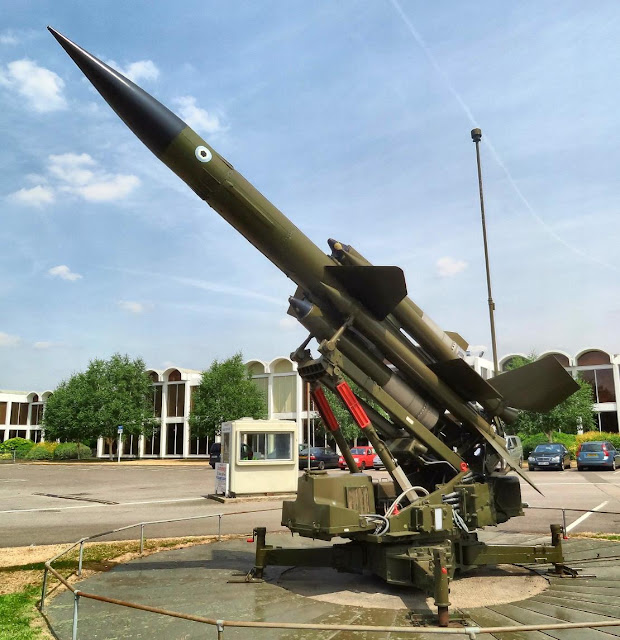 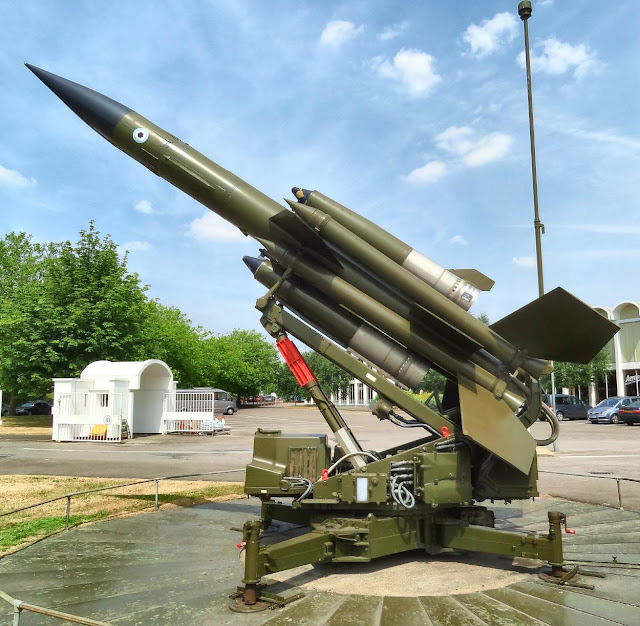 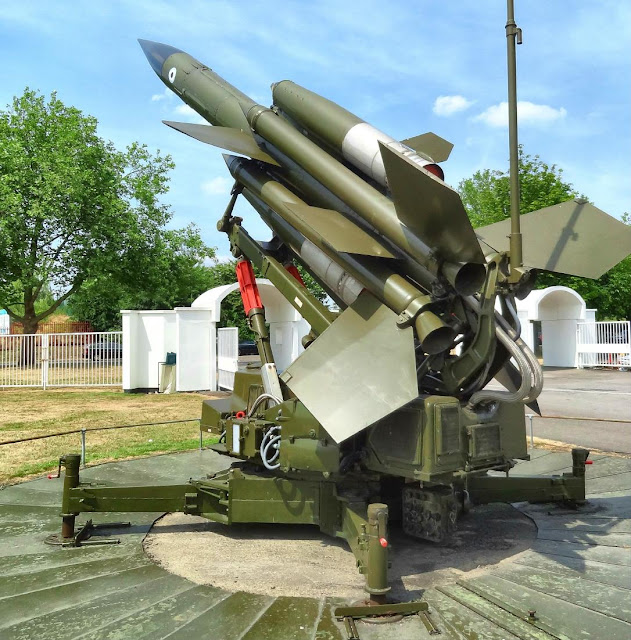 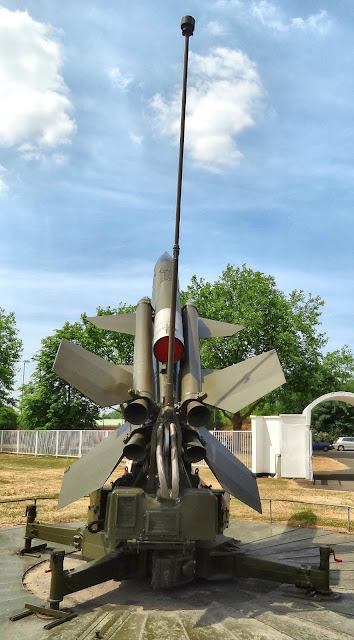 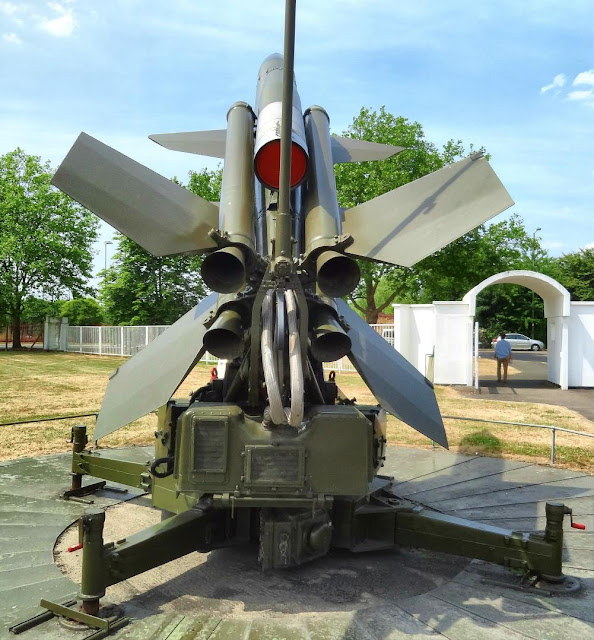 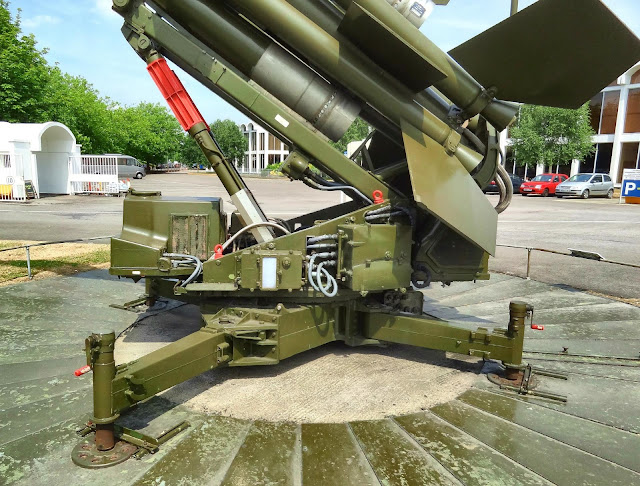 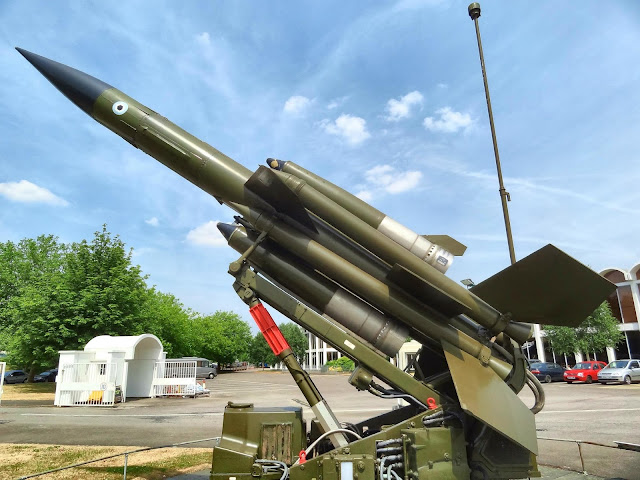 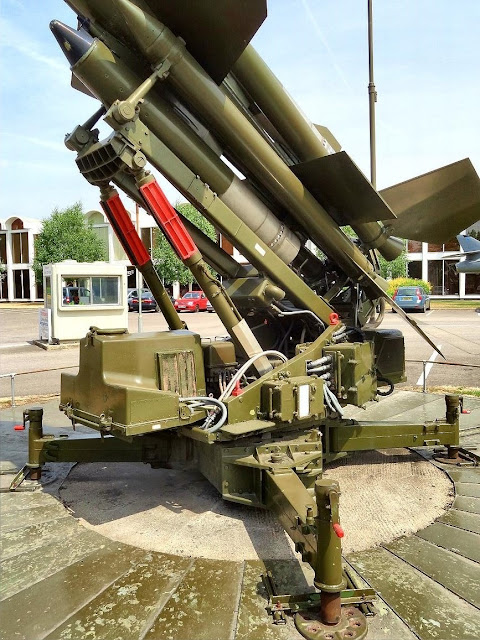 Posted by Scale models construction at 7:05 PM No comments: 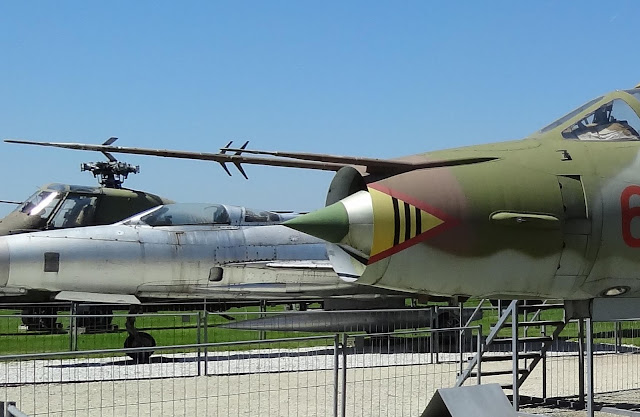 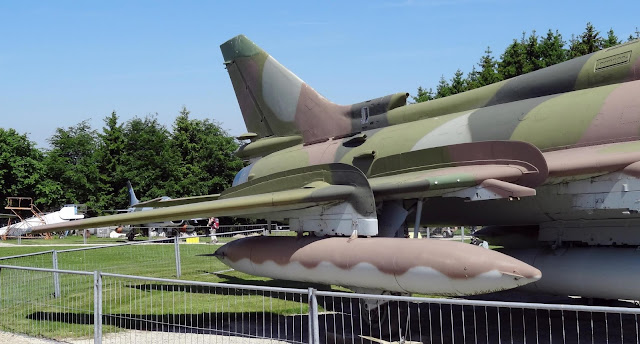 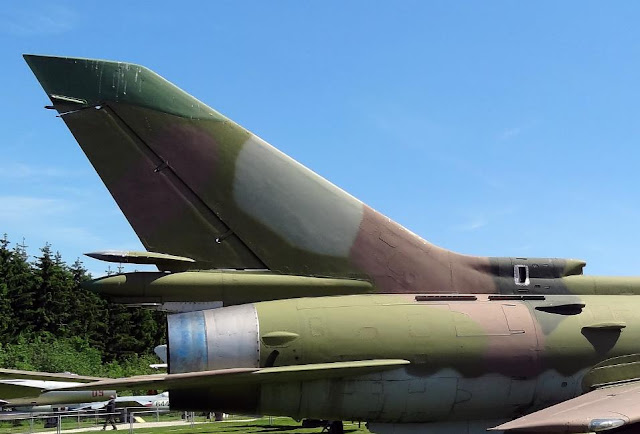 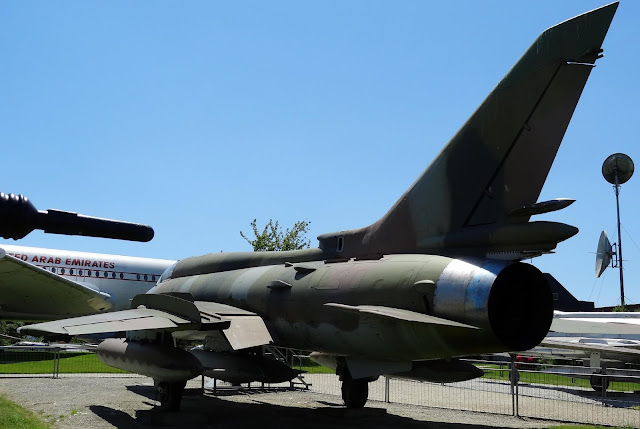 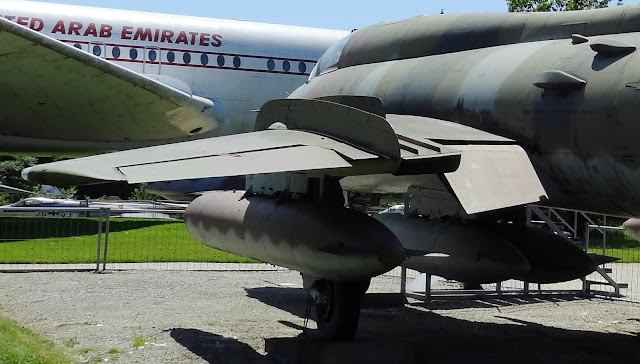 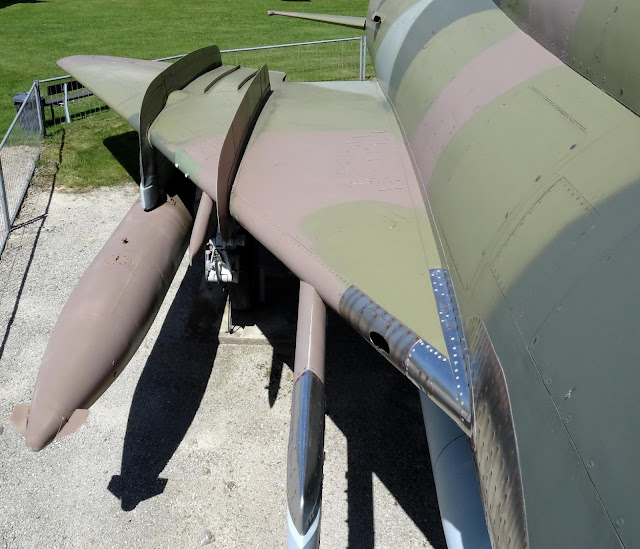 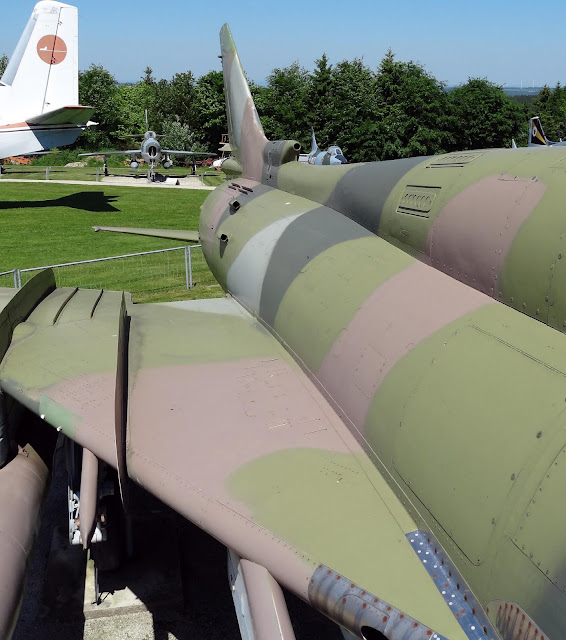 Posted by Scale models construction at 2:34 PM No comments: