Subject: Supermarine Spitfire Mk5B RAF Serial Number BL614
Location: RAF Museum, Hendon, London, UK 2013.
Comments:The Spitfire MkV was one of the most successful 'stop-gaps' ever introduced into Royal Air Force Service. Over one hundred and forty RAF squadrons operated the type. It served on all battlefronts and was supplied to nine other countries including the Soviet Union and the United States. During 1940 the Spitfire MkI and MkII barely maintained superiority over the Messerschmitt Bf109E so the Air Staff turned their attention to the question of a replacement. Their preferred successor was the MkIII, fitted with a Merlin XX engine and incorporating a new wing design. Realising it would take time to tool up for a new production aircraft and because of problems with the Merlin XX, the Air Ministry asked Rolls-Royce, as an interim measure, to install the Merlin 45 engine in the Spitfire MkI airframe. Between 1941 and 1943 over 6500 of this MkV version were produced. The spitfire MkIII never did go into production but some of the new design features intended for it were incorporated into the MkV. By 1944 only five squadrons remained in service. Even so, two Spitfire MkV squadrons provided gunfire direction on 6 June 1944 for naval units off the D-Day beached of Normandy. 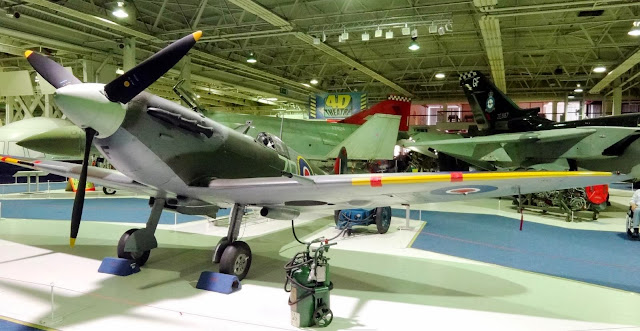 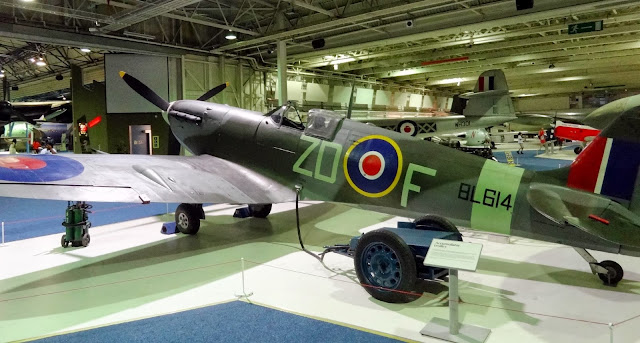 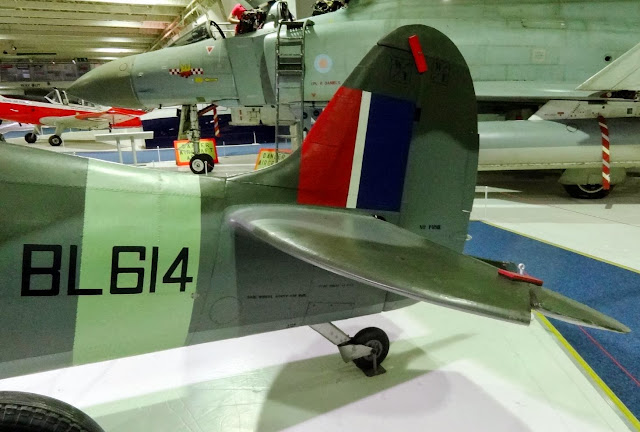 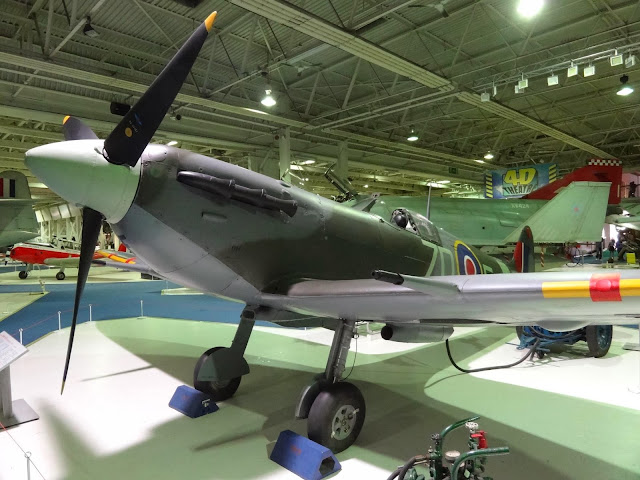 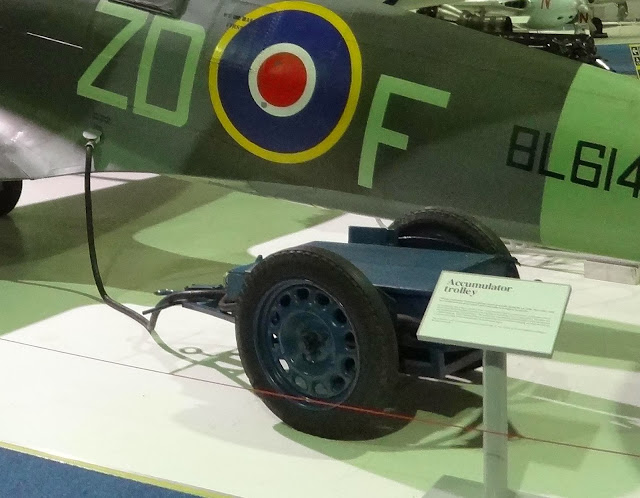 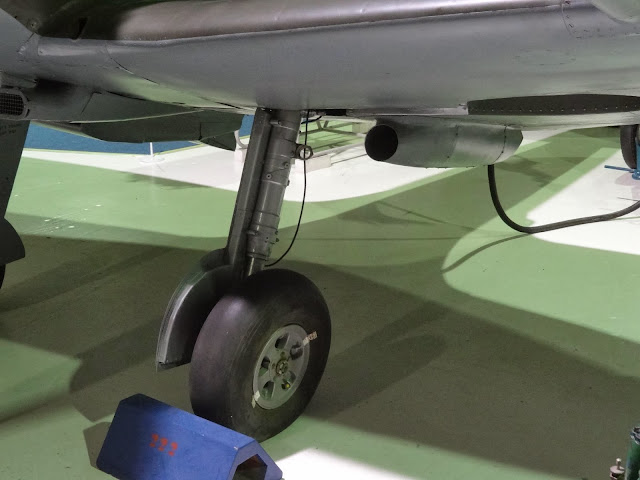 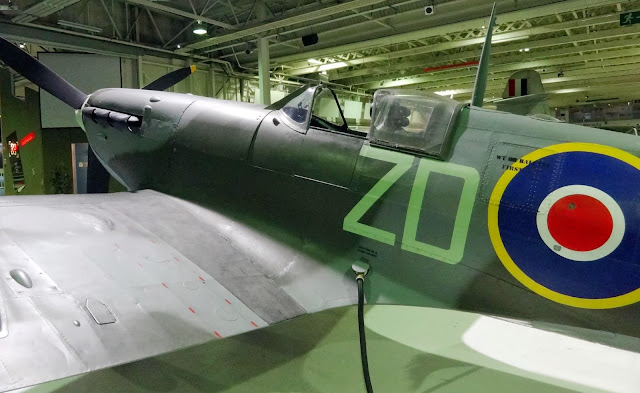 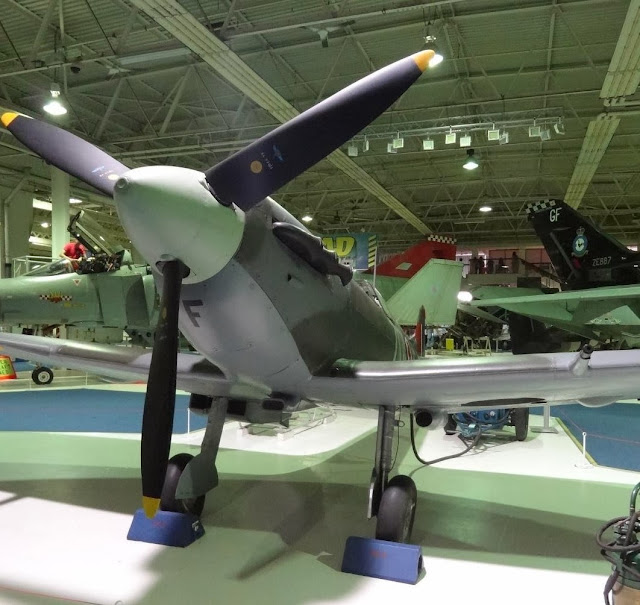 Subject: Supermarine Spitfire F24 RAF Serial Number PK724
Location: RAF Museum, Hendon, London, UK 2013
Comments:The Spitfire F24 was the ultimate development of the type, but the advent of the jet fighter meant that only small numbers were built and even fewer went into Royal Air Force service.The last major production Spitfire was the F22. The F24 differed only in the smallest of details and in fact some F24s were converted from F22 airframes. Only seventy F24s were completed and most went into store although No.80 Squadron was fully equipped with the type. These ultimate examples of the Spitfire incorporated all the modifications and improvements developed on earlier marks. The F24s had a tear-drop canopy for greater visibility and enlarged tail surfaces for better control. Like many of the later marks the F24 was fitted with the more powerful Griffon engine which provided a 160kph (100mph) greater top speed than the early Spitfires and almost twice the rate of climb. The weight of firepower from its cannon had tripled over the types' original fit of eight machineguns. It is perhaps a mark of the propaganda value of the Spitfire name that this very different machine was not re-named. 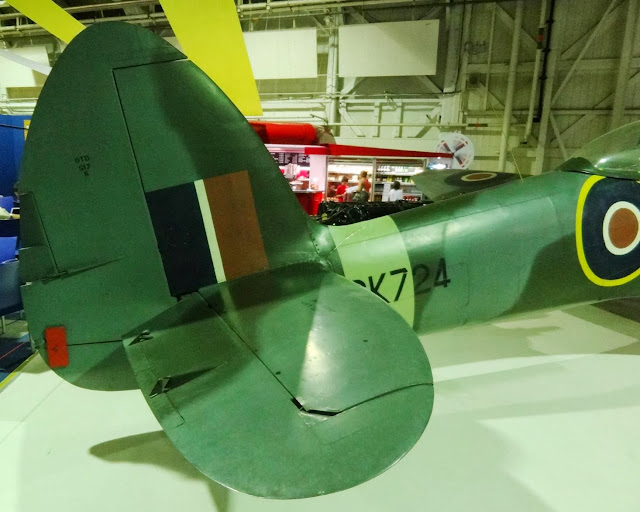 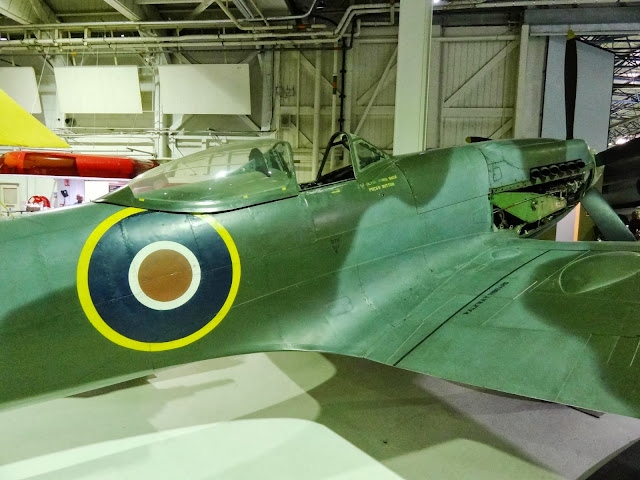 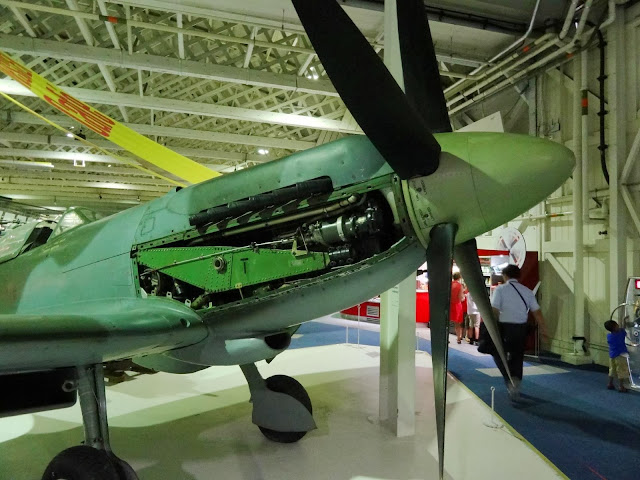 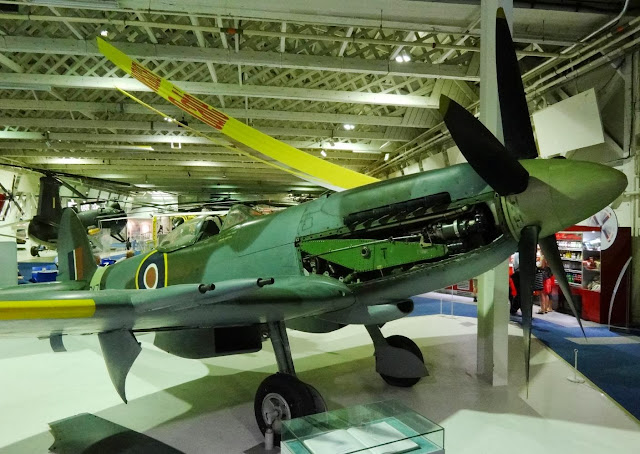 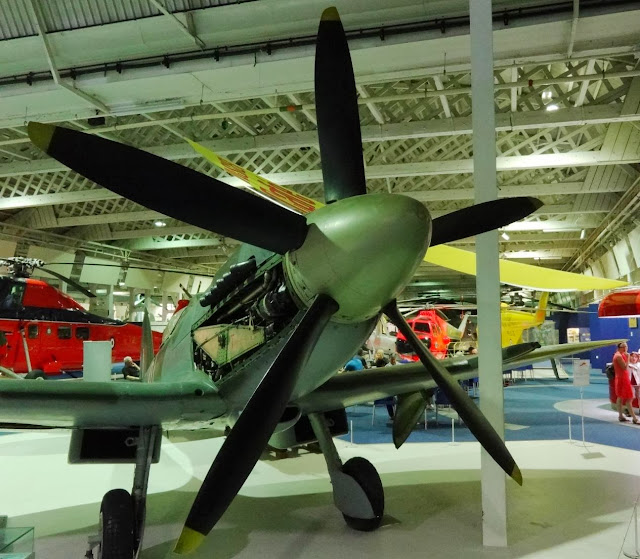 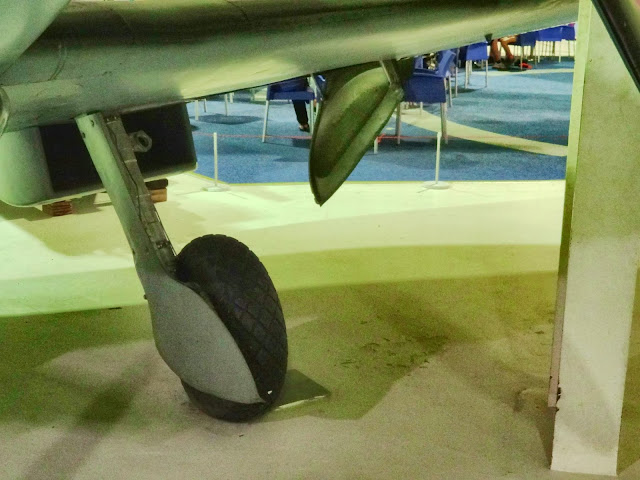 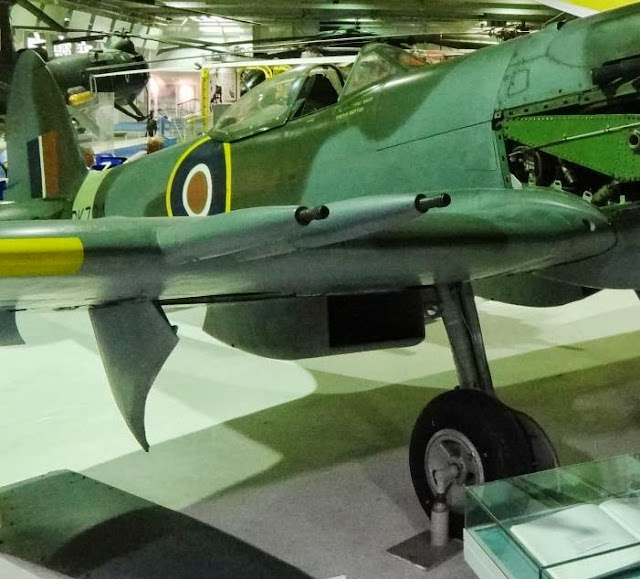 Subject: : Supermarine Spitfire Mk1 RAF Serial Number X4590
Location: RAF Museum, Hendon, London, UK 2013.
Comments:The Spitfire is the most famous British fighter aircraft in history. It became a symbol of freedom during the summer months of 1940 by helping to defeat the German air attacks during the Battle of Britain. It was the highest performing Allied aircraft in 1940. The crowds at the 1936 RAF Display at Hendon had a first glimpse of the prototype Spitfire in the New Types Park but it was not until August 1938 that production Spitfires began to enter service. By the outbreak of war, a year later, nine squadrons were equipped. In spite of vigorous demands from the France the Commander in Chief of Fighter Command refused to send any Spitfires to France during the German Blitzkrieg of 1940. The wisdom of that decision was clearly shown. By July 1940 RAF Fighter Command had nineteen Spitfire MkI squadrons available.Once the RAF modified their tactics to properly counter the Luftwaffe, the Spitfire MkI proved to be the only British fighter capable of meeting the Messerschmitt Bf109E on equal terms. Often the outcome of a combat depended more on the quality of the pilot than his aircraft.Further improvements in performance were made by fitting new type propellers, known as constant speed units, and modifying the Merlin engine to run on 100 octane fuel. 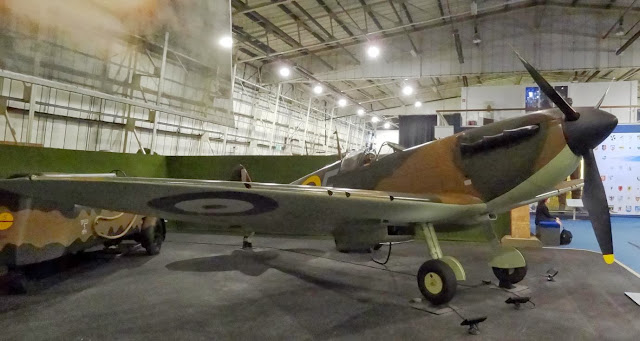 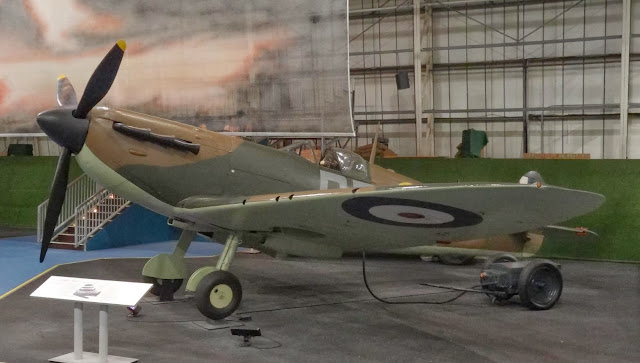 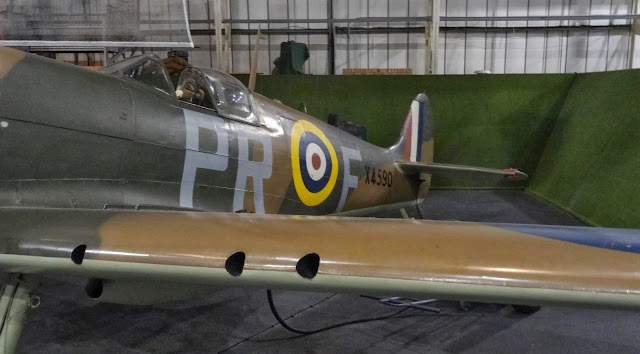 Posted by Scale models construction at 6:49 AM