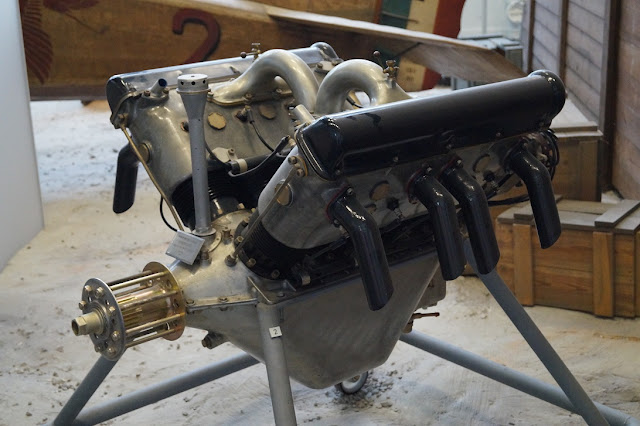 Location:Musée d'lair et de l'espace, Le Bourget, Paris, 2015.
Comments: At the beginning of the First World War the production lines of the Barcelona based Hispano-Suiza automobile and engine company were switched to the production of war materiel. Chief engineer Marc Birkigt led work on an aircraft engine based on his successful V8 automobile engine. The resulting engine, called the Hispano-Suiza 8A (HS-31), made its first appearance in February 1915. The first 8A kept the standard configuration of Birkigt's existing design: eight cylinders in 90° Vee configuration, a displacement of 11.76 litres (717.8 cu in) and a power output of 140 hp at 1,900 rpm. In spite of the similarities with the original design, the engine had been substantially refined. The crankshaft was machined from a solid piece of steel. The cylinder blocks were cast aluminium and of. 'mono-block' type that is, in one piece with the SOHC cylinder heads. The inlet and exhaust ports were cast into the blocks, the valve seats were in the top face of the steel cylinder liners, which were screwed into the blocks. Using a rotary driveshaft (tower gear) coming up from the crankcase along the rear end of each cylinder bank, with the final drive for each cylinder bank's camshaft accommodated within a semicircular bulge at the rear end of each valve cover. Aluminium parts were coated in vitreous enamel to reduce leakage. All parts subject to wear, and those critical for engine ignition were duplicated: spark plugs for dual ignition reliability, valve springs, magnetos, etc. Engine reliability and power to weight ratios were major problems in early aviation. The engine and its accessories weighed 185 kg (408 lb), making it 40% lighter than a rotary engine of equivalent power. (Note: This empty weight does not include the radiator and coolant fluid. Generally, air-cooled engines are lighter than their equivalent horsepower water-cooled counterparts. For example, the Bentley BR.2 rotary put out 230 hp (170 kW) and weighed 220 kg (490 lb), Clerget 9B rotary 130 hp (97 kW), 173 kg (381 lb)) The new engine was presented to the French Ministry of War in February 1915, and tested for 15 hours at full power. This was standard procedure for a new engine design to be admitted into military service. However, because of lobbying by French engine manufacturers, the Spanish-made engine was ordered to undergo a bench test that no French-made engine had yet passed: a 50-hour run at full speed. The HS-31 was therefore sent back to Chalais-Meudon on July 21, 1915 and tested for 50 hours, succeeding against all expectations. The design also promised far more development potential than rotary engines which, in spite of being the most common type then in use for aircraft, were getting close to the limits of their development. Rotary engines of increased power generally had increased weight, which in turn increased the already serious gyroscopic torque generated by the engine's rotation. A further increase in torque was considered unacceptable, and the power to weight ratio of the new rotary engines under development did not appeal to aircraft designers. French officials ordered production of the 8A to be started as soon as possible and issued a requirement for a new single-seat high-performance fighter aircraft using the new engine. The Louis Béchereau-designed SPAD VII was the result of this requirement and allowed the Allies to regain air superiority over the Germans. 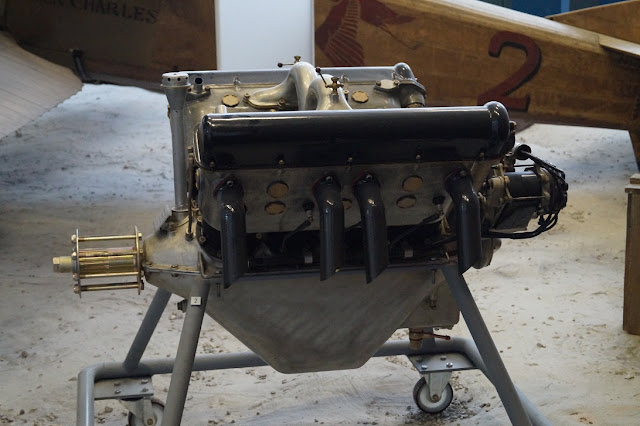 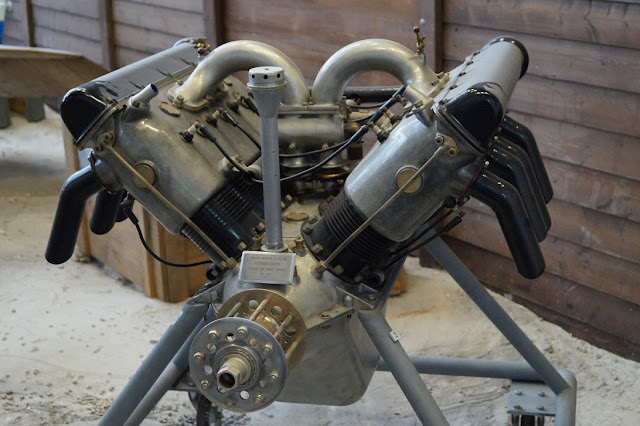 Posted by Scale models construction at 10:27 AM