Subject: Lewis Twin aerial machine gun:
Musée d'lair et de l'espace, Le Bourget, Paris 2015
Comments: The Lewis gun was invented by U.S. Army colonel Isaac Newton Lewis in 1911, based on initial work by Samuel Maclean. Despite its origins, the Lewis gun was not initially adopted by the U.S. military, most likely because of political differences between Lewis and General William Crozier, the chief of the Ordnance Department. Lewis became frustrated with trying to persuade the U.S. Army to adopt his design, "slapped by rejections from ignorant hacks", in his words, and retired from the army. He left the United States in 1913 and went to Belgium, where he established the Armes Automatique Lewis company in Liège to facilitate commercial production of the gun. Lewis had been working closely with British arms manufacturer the Birmingham Small Arms Company Limited (BSA) in an effort to overcome some of the production difficulties of the weapon. The Belgians bought a small number of Lewises in 1913, using the .303 British round and, in 1914, BSA purchased a licence to manufacture the Lewis machine gun in England, which resulted in Lewis receiving significant royalty payments and becoming very wealthy. Lewis and his factory moved to England before 1914, away from possible seizure in the event of a German invasion.he Lewis gun has the distinction of being the first machine gun fired from an aeroplane; on 7 June 1912, Captain Charles Chandler of the US Army fired a prototype Lewis gun from the foot-bar of a Wright Model B Flyer.Lewis guns were used extensively on British and French aircraft during the First World War, as either an observer's or gunner's weapon or an additional weapon to the more common Vickers. The Lewis's popularity as an aircraft machine gun was partly due to its low weight, the fact that it was air-cooled and that it used self-contained 97-round drum magazines. Because of this, the Lewis was first mounted on the Vickers F.B.5 "Gunbus", which was probably the world's first purpose-built combat aircraft when it entered service in August 1914, replacing the Vickers machine gun used on earlier experimental versions. It was also fitted on two early production examples of the Bristol Scout C aircraft by Lanoe Hawker in the summer of 1915, mounted on the port side and firing forwards and outwards at a 30° angle to avoid the propeller arc.

Subject: Parabellum aerial machine gun
Musée d'lair et de l'espace, Le Bourget, Paris 2015
Comments:The Parabellum MG14 was a 7.9 mm caliber World War I machine gun built by Deutsche Waffen und Munitionsfabriken. It was a redesign of the Maschinengewehr 08 machine gun (itself an adaptation of the Maxim gun) system intended for use on aircraft and zeppelins, that used a toggle action that broke upwards rather than downwards opposite the MG 08, making for a much more compact receiver. The fusee spring was dispensed with for an internal spring design, the breech block was completely different and the spent cartridges dropped out the bottom of the receiver, rather than being ejected forward through a hole under the breech from the receiver. There appears to be no action or receiver parts interchangeable with the MG 08. The MG08's belt-style ammunition feed was enclosed in a drum, the recoil casing was lightened and the cooling jacket was modified for air- instead of water-cooling. The rate of fire was 700 rounds/minute. The belt was reduced to 30 mm in width.An MG14 was used in the early development of the German version of the gun synchroniser by Anthony Fokker. The MG14 was used with the first version of the pioneering Fokker Stangensteuerung synchronizer on the five Fokker M.5K/MG pre-production prototypes for the Fokker E.I, but as the limited supplies of the weapon were more urgently needed for observers in reconnaissance aircraft and defensive gunners aboard Zeppelins and heavier-than-air bombers - as well as its temperamental nature as used on the M.5K/MG, as noted by Otto Parschau - it was reserved for flexible mounts where its combination of light weight and high rate of fire were most useful.The MG 14 and following on MG 14/17 did make one important contribution to the fixed forward-firing LMG 08's and LMG's 08/15's in that their 30mm wide cloth ammunition belt was compatible with those weapons as the fixed forward-firing guns used fixed ammunition feed guides and if surviving photographs are to be used as a reference, the belts were used exclusively by the Deutsche Luftstreitkräfte for all fixed forward-firing guns. The belts can be readily identified by two grommets (instead of three for the wider MG 08 and MG 08/15 belts used by ground forces) and the lack of extended brass tab (also used by the MG 08 and Mg 08/15 ground guns). This not only reduced weight and bulk but it also allowed for much lighter and smaller empty belt chutes that came out of all LMG 08's and LMG 08/15's and led down into storage bins in the aircraft. At least three versions survive, a water cooled, an air cooled and a 14/17 version with a 3x telescopic sight.

Subject: Vickers aerial machine gun
Musée d'lair et de l'espace, Le Bourget, Paris 2015
Comments: The Vickers machine gun or Vickers gun is a name primarily used to refer to the water-cooled .303 British (7.7 mm) machine gun produced by Vickers Limited, originally for the British Army. The machine gun typically required a six to eight-man team to operate: one fired, one fed the ammunition, the rest helped to carry the weapon, its ammunition, and spare parts. It was in service from before the First World War until the 1960s, with air-cooled versions of it on many Allied World War I fighter aircraft. In 1913, a Vickers machine gun was mounted on the experimental Vickers E.F.B.1 biplane, which was probably the world's first purpose-built combat aeroplane. However, by the time the production version, the Vickers F.B.5, had entered service the following year, the armament had been changed to a Lewis gun. During World War I, the Vickers gun became a standard weapon on British and French military aircraft, especially after 1916. Although heavier than the Lewis, its closed bolt firing cycle made it much easier to synchronize to allow it to fire through aircraft propellers. The belt feed was enclosed right up to the gun's feed-way to inhibit effects from wind. Steel disintegrating-link ammunition belts were perfected in the UK by William de Courcy Prideaux in mid-war and became standard for aircraft guns thereafter. By 1917 it had been determined that standard rifle calibre cartridges were less satisfactory for shooting down observation balloons than larger calibres carrying incendiary or tracer bullets, the Vickers machine gun was chambered in the 11mm Vickers round, known as the Vickers aircraft machine gun and sometimes the "Balloon Buster", was adopted by the allies as a standard anti-balloon armament and used by both the British and French in this role until the end of the war.The famous Sopwith Camel and the SPAD XIII types used twin synchronized Vickers, as did most British and French fighters between 1918 and the mid-1930s. In the air, the weighty water cooling system was rendered redundant by the chilly temperatures at high altitude and the constant stream of air passing over the gun as the plane flew; but because the weapon relied on barrel recoil, the (empty) water-holding barrel jacket or casing needed to be retained. Several sets of louvred slots were cut into the barrel jacket to aid air cooling, a better solution than what had initially been attempted with the 1915-vintage lMG 08 German aircraft ordnance. 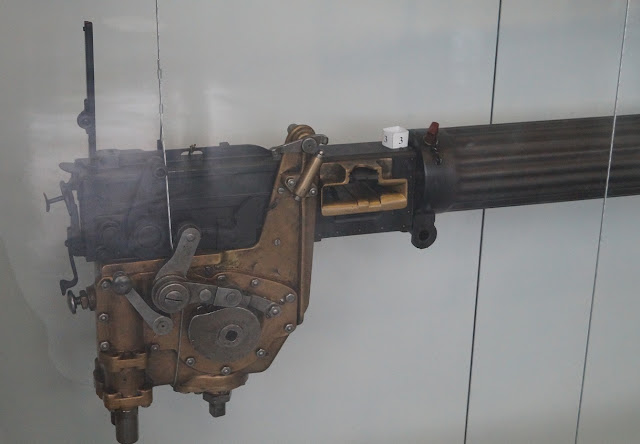 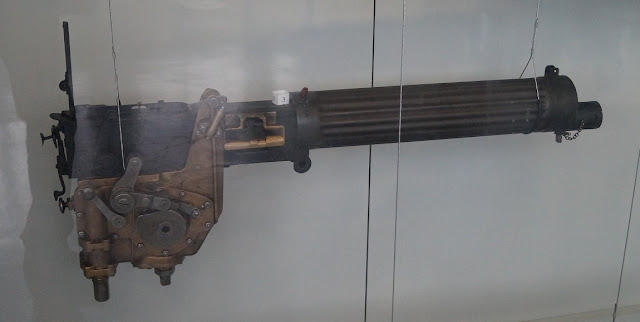 Posted by Scale models construction at 10:28 AM