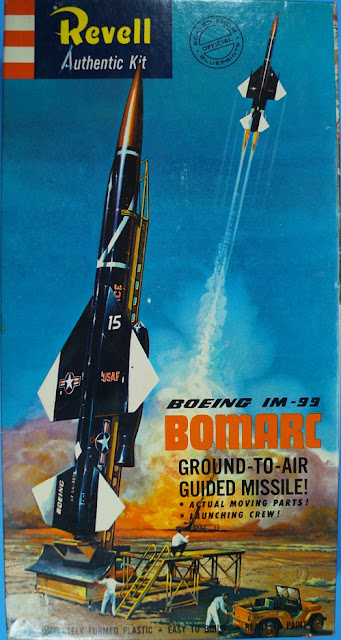 Scale: 1/47
Description: 1957 injection molded kit in dark blue colored plastic,with waterslide decals.
Price: US$180,00 in good conditions
Comments: This kit was introduced by Revell in 1957 complete with the missile and the launch pad combined with some crew members. It is one of the famous box scale models with na odd scale. However, the level of detail is impressive considering the age of the molds. Originally, it was labeled H-1860. Around 1980, it was re-released by Revel in their "history Makers" series. Since then, the  molds were no longer used and hopefully have survived the test of time to be once again released for the nostalgic modelers and for the fans of 1950 military technology.
The Boeing CIM-10 Bomarc (IM-99 Weapon System prior to September 1962) was a supersonic ramjet powered interceptor for Cold War air defense of North America which, in addition to being the first long-range anti-aircraft missile (cf. proposed WIZARD predecessor), was the only SAM deployed by the United States Air Force. It used the same Marquardt RJ43 as the Lockheed X-7 hypersonic prototype and the Lockheed AQM-60 drone. Its models had a range of 250 to 440 miles. Stored horizontally in a launcher shelter with movable roof, the missile was erected, fired vertically using rocket boosters and then ramjet-powered duringmidcourse command guidance to a dive point. During the "homing dive", the missile's onboard AN/DPN-34 radar allowed the BOMARC to guide itself to the target (e.g., enemy bomber or formation) and a radar proximity fuze detonated the warhead (conventional or 10 kiloton nuclear W-40). After the 17 May 1957, $7 million initial contract for operational aircraft, the "Interceptor Missile" was deployed at launch areas in Canada and the United States (e.g., the 1960 Fort Dix IM-99 accident contaminated a launch area.) Boeing indicated: "Differences in the Langley Base layout are due to planning for accommodation of the advanced missile system [(IM-99B) ground equipment with equipment for] the IM-99A system". Launches were from Florida test range sites (AFMTC & Eglin's Santa Rosa Island) and controlled by AN/GPA-35 and/or AN/FSQ-7 computers, e.g., theMontgomery SAGE Center commanded three BOMARCs simultaneously in-flight during a May 1960 test. BOMARC launches as target drones began atVandenberg Air Force Base on 25 August 1966 (the 1st Vandenberg BOMARC launch was 14 October 1964). 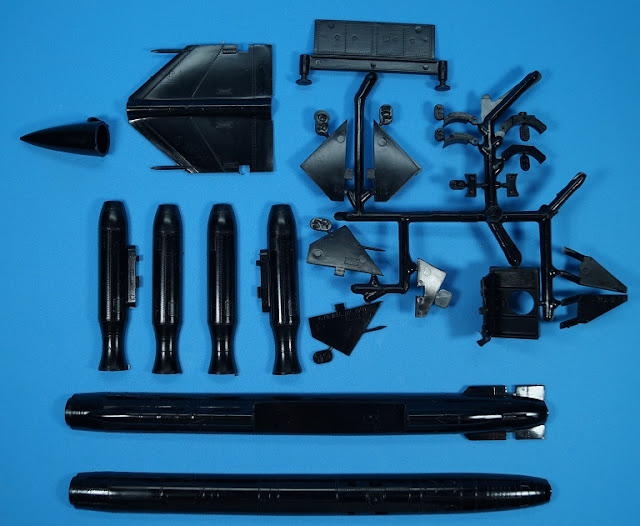 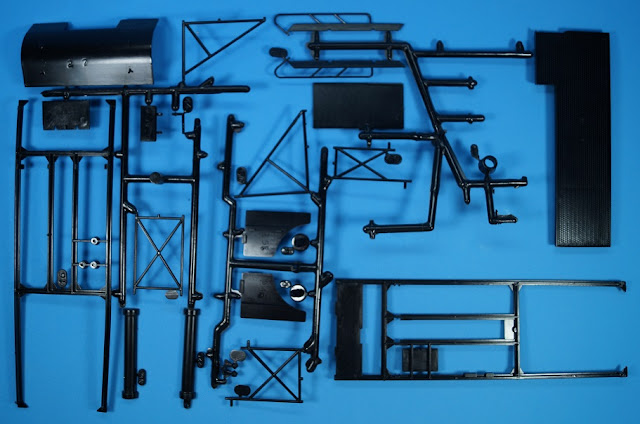 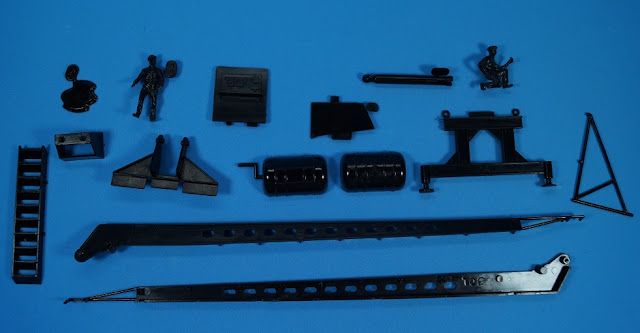 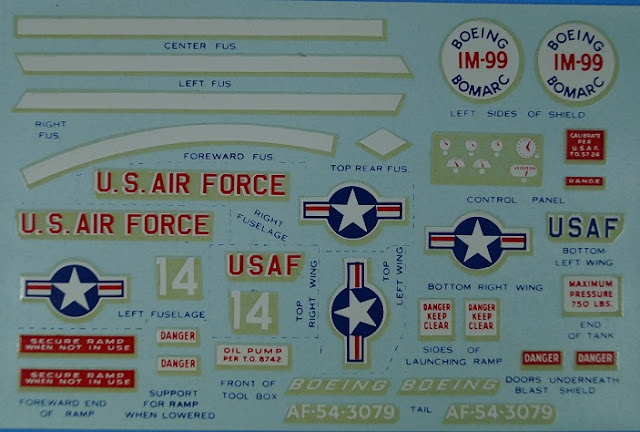 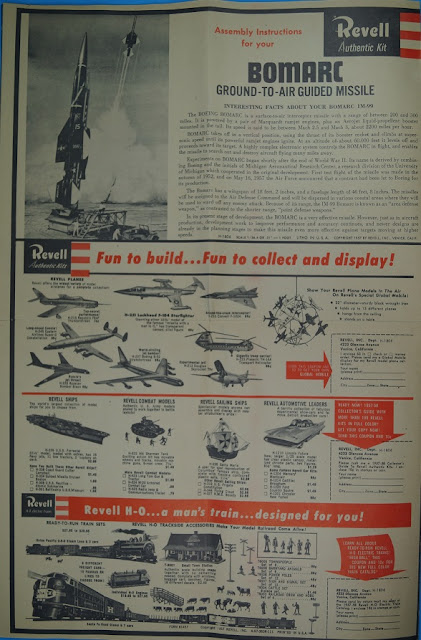 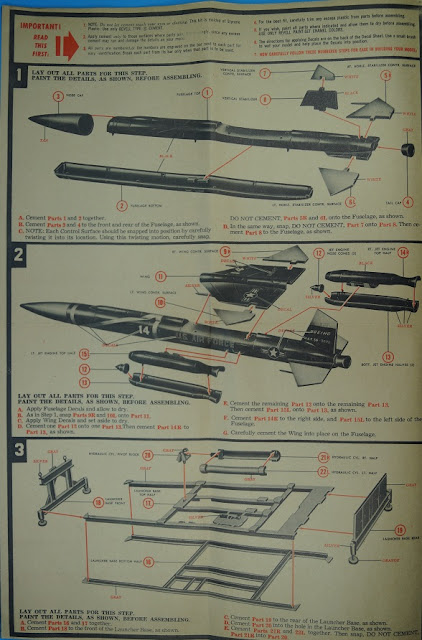 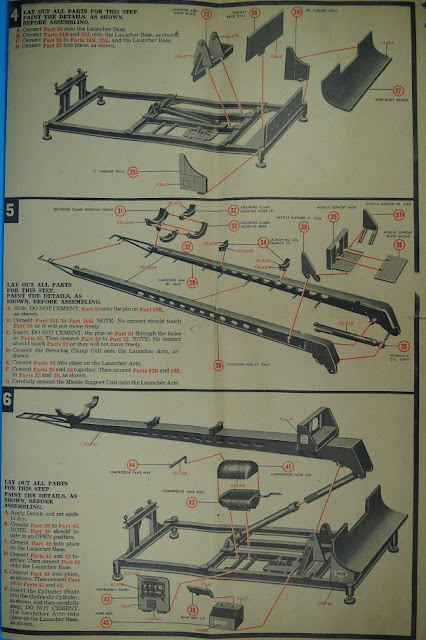 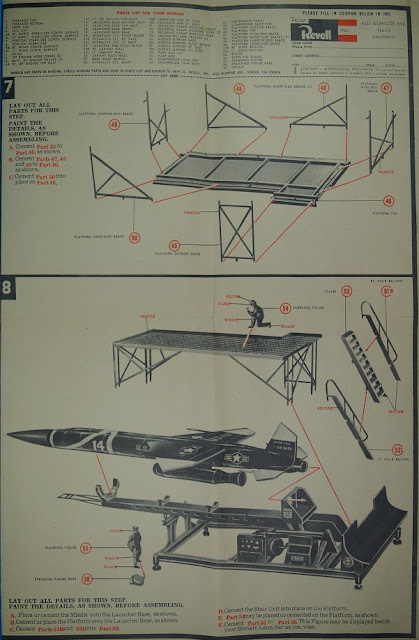 Posted by Scale models construction at 9:43 AM